Anybody who reads this page knows that there's a lot of idiotic and worthless crap floating around this open sewer we call the "Internet." Hell, there's enough idiotic and worthless crap floating around this site to choke and kill all the religious nuts shooting each other up in the Middle East. Well, assuming they are somehow able to eat idiocy and we can ship the idiocy to them without becoming the victim of a well-placed carbomb. 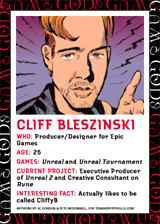 Will anybody take Cliffy B. seriously after this? Hell, did anybody ever take him seriously before?

However, it's a rare occurrence when a large, multinational magazine decides to ignore the traditional concept of "printing features which will not make grown men weep", and instead focus their attention on something so intensely stupid that the paper it was printed on runs the risk of combusting into a fiery inferno. If you don't know what I'm writing about, please be sure to click this link and discover PC Gamer's "The Next Game Gods Comic." I will pause for a moment to allow you ample time to wipe the tears (either from laughter or pity) from your eyes.

PC Gamer has taken it upon themselves to "immortalize" various people in the gaming industry by making comic strips and trading cards glorifying them. Now I know what you're thinking: "But Lowtax, didn't you make a 'Heroes of the Gaming Industry' card set over a month ago?" Yes I did. I made the series to poke fun of various gaming personalities and parody the notion that anybody even remotely involved with games could be some kind of superhero celebrity. Unfortunately, sometimes life imitates poorly-drawn art. PC Gamer, thinking that dressing Cliffy B. in all black and giving him a pair of sunglasses makes him less comical than the normal "suburbanite pirate pimp" motif he normally aspires for, has deemed a select few game producers as "Gods."

Unfortunately, there's one slight problem with this that the geniuses at PC Gamer seemed to have mistakenly overlooked: it's the absolute most moronic idea since the inflatable pincushion. For every person that worships somebody in the gaming industry, I can name one person who will buy a few acres of swampland in Florida. Is PC Gamer trying to make gaming industry nerds into living legends? Are we supposed to start bowing down and worshipping texture artists? Will we have to avert our eyes next time we encounter a game producer staring at young girls getting off the junior high school bus? Can you imagine your child telling you he wants to "be like American McGee" when he grows up? You'd hit the little idiot with a lamp and ship him off to boarding school within seconds! The whole concept of anybody in this industry as "Gods" simply boggles my mind.

To reinforce the notion that people like Robin "Team Fortress 2" Walker should be revered, PC Gamer has provided a "comic" strip that they will never, ever, EVER live down. When World War III is over and America lies in ruins, people will still be making fun of this comic. If aliens ever visit the Earth and are debating if we're advanced enough to join their Intergalactic Coalition of Smarty Men, they will see this comic and decide to not only prohibit us from joining, but they will abduct the entire PC Gamer office and put them in some kind of space zoo for display. The aliens will cheer and laugh when the PC Gamer employees hurl their own feces at them. Anyway, let's get on to a review of the PC Gamer "comic".

QUICK REVIEW OF THE PC GAMER "COMIC": Some evil guy who runs the evil Microsoft Software Division is forcing wussy slackjawed game designers to make an awful (and evil) game. This is humorous because, as everybody knows, Microsoft is evil! Only the most hilarious comics poke fun at Microsoft! For example, there's that one online comic that always goes on and on about how Linux rules and how Microsoft sucks, and man, that's just the funniest damn thing ever. Calling Microsoft "evil" and making fun of them never gets old! Comedy = writing MICROSOFT SUCKS!

Alex "Homeworld" Garden, who appears to be storing horseshoes or weather balloons in his chin, runs back to Game God Headquarters and informs Cliffy B. and American "American 'Alice' McGee's Alice" McGee (sorry, he has a self-recursive name) about this nefarious plan. Cliffy B. exclaims "CRIPES!" because that's the kind of expressions Game Gods use. Well, that and "Please Adrian Carmack, just leave my office." Cliffy B., American "American 'Alice' McGee's Alice" McGee, and Alex "Homeworld" Garden put on their Matrix-like outfits and posture while the phrase "THE NEW GAME GODS!!" appears above them. Notice there are two exclamation points which end up making it quite dramatic. This is all incredibly exciting and reminds me of a scene from "True Lies" or "On Golden Pond."

Meanwhile, ol Scratch is beating people with his whip and making a general nuisance of himself. He demands that his game skip QA and be released anyway. This is unheard of! Only the most evil and backwards of companies release products that haven't passed a rigorous inspection through QA! Nobody rushes products out the door! I mean, Unreal Tournament was completely playable on my nVidia card when it shipped! Daikatana had perfectly functioning sidekicks and no gamestopping bugs at all! Everquest was wonderfully balanced and hasn't been changed at all since its release! That damn evil Microsoft! They're so damn evil! And evil too!

Luckily, justice is in the cards for the Gaming Gods! Microsoft releases their crappy product and is greeted by a splash article on the front page of PC Gamer, declaring it the "WORST-SELLING GAME EVER!" Wow! I guess I can really trust all the reviews from PC Gamer now! They "tell it like it is!" They don't bother kissing asses of game developers and making completely stupid comics of them just so they might get more exclusives and demos! They're a consumer's best friend!

The comic ends with some guy thanking Alex "Homeworld" "Strategy Lad" Garden for making sure PC Gamer made a magazine claiming Microsoft's game was the "WORST-SELLING GAME EVER!" or however the hell they managed to defeat the evil Microsoft. A very fulfilling ending indeed, especially considering absolutely NOTHING happened throughout the entire comic strip.

So what's the point of this horrible mess? Beats the hell out of me. Will this sell their magazine? I doubt it, unless they're shipping them to obscure South American tribes who have never seen colors on printed paper before. Will this get them more exclusive scoops from game publishers? Probably not, unless game designers like seeing pictures of them which look like (as Hellchick phrased it) "Johnny Quest rejects." Since I cannot possibly determine the motive for producing something so horrible, I will simply thank them for fueling the ever burning fire of crap that drives this site.

TOMORROW: A review of the "Gaming Gods trading cards!"

In response to the PC Gamer article and the quickly approaching Halloween holiday, Jeff K. has created another spooky episode of "HUANTED TAILS OF HOARROAR!" Today's episode may shock and disturb you, so get read for the...

Buckle up, bonehead! You're going for a ride!

Cranky Steve's Haunted Whorehouse has made a huge step today. Yes, we have pulled aboard Jed to look at and review the most terrible Half-Life maps out there. People have been asking for a LONG time for us to review Half-Life maps, and that time has come. If you have links to any terrible Half-Life maps (do NOT send in the maps themselves), be sure to drop an email to Jed with the link. He needs as many crap HL maps as possible. For example, one like this:

Well, any map that appears to be made entirely out of sheet metal and drywall is alright in my book... except this one. The deranged 11-year old responsible for "Myhome" has absolutely no sense of proportion and tosses random textures everywhere like an angry, disoriented wallpaper hanger with attention deficit disorder. The map's lighting basically follows the same philosophy, as each grotesquely disfigured room you encounter contains some different sort of failed experiment in attempted illumination. This house has no visible windows or exits either, probably because the place was condemned and boarded up after the owner went crazy, murdered his family, and installed seven miles of RGB track lighting.

Check out his review of the Half-Life monstrosity, "Myhome." As an additional treat, Squonkamatic has also reviewed two new Quake 2 maps! Head over the the Whorehouse and feast your eyes upon a veritable bonanza of failed mapmaking and wasted lies!