A Caricature Artist Describes His Attackers

The first guy had a disproportionately huge head and a big dimpled smile with a comical gap between his two front teeth. His hair was kind of exaggerated and tussled, a lone strand standing straight up in the back. 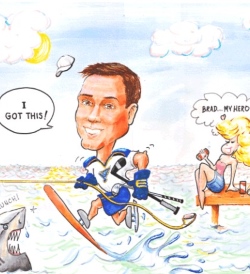 He was wading in shallow water. He had a yellow inflatable tube around his waist, the kind with a comical duck head. There was a tiny fish in one of his hands, and a trident in the other. In the background a squirrel wearing sunglasses was water skiing.

Since the water was only a cross-section, I was able to clearly see beneath the surface. The guy's shorts were white boxers with red hearts. He had snorkeling flippers on his feet, one of which was colliding with a treasure chest overflowing with gold and jewels. There were little lines and stars indicating the impact.

The thought balloon near his head read, "Ow, stupid rocks!" This was comical because he didn't realize his foot was actually colliding with a treasure chest.

Describe his face in detail? Well, I already did. It was a big head and he was smiling.

So the next guy. This guy was in outer space. He had one of those fishbowl helmets. Clear all the way around, so you could easily see his disproportionately huge head and big dimpled smile with a comical gap between his two front teeth. His hair was kind of exaggerated and tussled.

He was wearing a classic NASA spacesuit and standing on a tiny moon that was actually a chunk of swiss cheese.

The guy was in the middle of swinging a golf club. The ball he was about to hit was attached to a length of string disappearing into one of the cheese moon's many holes. On the opposite side of the cheese moon, a giggling mouse with alien antennae was in the act of tugging the other end of the string.

Finally, there was the strong man.

He had a disproportionately huge head and a big dimpled smile with a comical gap between his two front teeth. His hair was kind of exaggerated and tussled.

He was wearing one of those black unitards like Andre the Giant, and a championship belt with "#1 Muscles" stamped on the front. In one hand he was effortlessly lifting an enormous stack of weights. In the other hand was a Report Card containing nothing but the letter F circled in red.

On his head was a tiny beanie hat. You know, the kind with a spinning propeller. A speech bubble next to his head simply stated, "Durrr."

Please, you've got to find these men.

(At this point the witness succumbs to his injuries: A trident stab wound in the heart, exposure to the vacuum of space, and decapitation via beanie propeller)