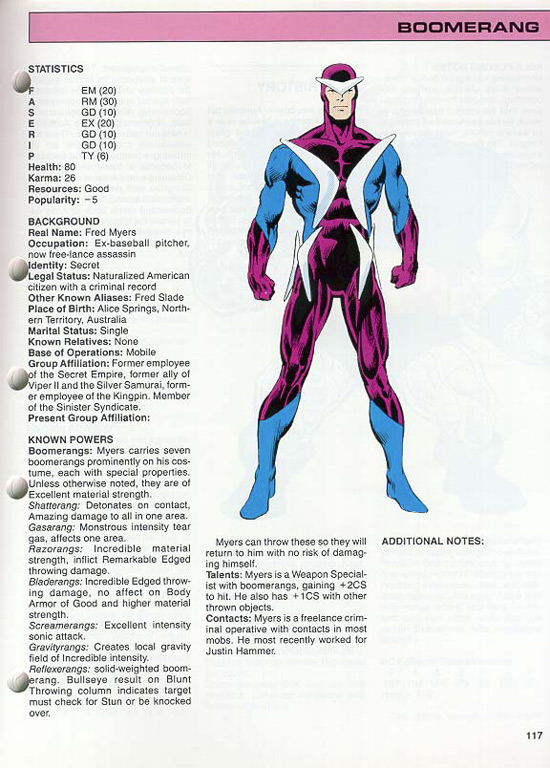 Zack: "Honey, I can't find my boomerang! Do you...oh, here it is. Duh. I left it right here on my everywhere."

Steve: He's from Australia, which makes this dude seem a little racist to me.

Steve: Yeah, but the USA had slavery.

Zack: 150 years ago and then the evil South attacked us and Abraham Lincoln said we had to end slavery and we cured it by making every college admit 250 black kids a year. The end. I think in the midst of Australia's ongoing pogrom against tha fooken abos they can get over one stereotyped comic book character from 25 years ago.

Steve: You say that, but try switching any country for Australia and put in that country's stereotype trait and it's going to seem racist. Like he's from Canada and his power is he relies on Captain America to do all the fighting and then smokes weed and sits on Captain America's couch and watches his cable.

Zack: Or he's from the USA and he's really sexy and good at everything and can beat any military and practically invented huge tits and good teeth and all the good shit like TV and the Internet. Yeah that's really terrible.

Steve: I don't think those are really the stereotypes of the United States outside the USA.

Zack: What, am I going to listen to what the commies think about us? Have you seen their comic books? It's a bunch of comics about Japanese soldiers in Nanjing chopping babies with samurai swords and the USA losing to North Korea because one of our helicopters crashed on a starvation farm in 1971. Those guys are a joke.

Steve: What about an Irish super hero who drinks all the time and fights a lot? That would be pretty racist.

Zack: Steve, okay, we're talking about a genre where until about 1998 every African American superhero had to have "Black" in his name. You need to take what you can get.