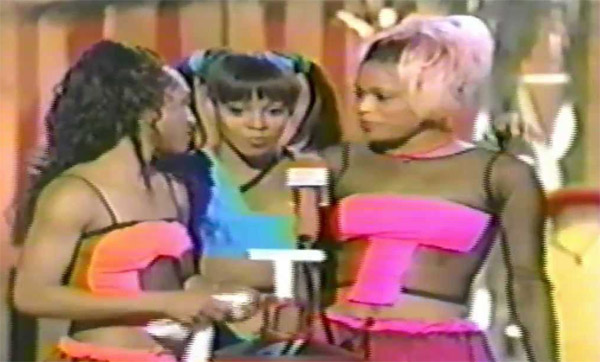 Zack: Remo wants to set up a meeting. Something low key and inconspicuous at the Nickelodeon Kids' Choice Awards. He says he has vital information about Morton Downey Junior. He can create a distraction by sliming the entire audience, giving Left Eye a chance to slip away from a dance routine with Paula Abdul.

Steve: Left Eye will agree to his plan, but she's going to tell Kurt and Eazy-E so she has backup.

Zack: They can hang out backstage but Double P is a little bit too edgy for Nickelodeon.

Steve: Let's do this.

Zack: You arrive in LA for the fifth annual Kids' Choice Awards. It's a star-studded affair with Paula Abdul hosting. Robin Williams is there, Whoopi Goldberg is there, and the Teenage Mutant Ninja Turtles are there. In your dressing room you find a note from Remo telling you to meet him in the room where they store the equipment for the orchestra pit.

Steve: Left Eye will be very wary in case there are traps.

Zack: There are the usual slime traps, but as long as you watch where you stand you should be safe from those. Paula is going to be performing Vibeology and she has asked Left Eye to dance in the performance.

Steve: Kurt amd Eazy-E will be keeping an eye on the performers backstage.

Zack: The Teenage Mutant Ninja Turtles are doing a lot of heroin. It's making Kurt itchy and if he doesn't score soon he is going to be in a bad way.

Steve: He'll buy some secret ooze from them.

Zack: How is he going to approach four guys in turtle suits?

Zack: They say stuff back to you, but you can't understand them through their thick turtle masks. There is an odd smell. It might be the suits.

Steve: Kurt will flash a bunch of money at them.

Zack: Alright, let's leave that there. While that's going on, Left Eye is onstage dancing to Vibeology. Which is not easy. Suddenly, sprayers open up on the ceiling and start hosing the entire audience down with slime. The room erupts in chaos.