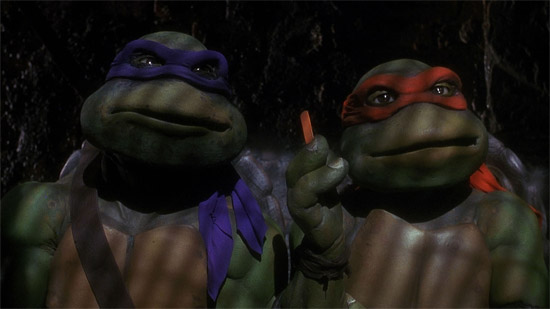 Steve: Left Eye is slipping offstage and heading to the storage room.

Zack: It's dark. There's a weird smell in the room. Like something is rotting.

Steve: Turn on the lights.

Zack: Leftenant Remo Harris is dead on the floor. You're pretty sure it's him because of the beret and the sweater with the shoulder boards, although he doesn't have a face. Also you feel your sanity shaken by seeing your friend with no face.

Steve: Searching his body for any clues.

Zack: Whoever killed him has emptied his pockets. They're actually turned inside out and there is nothing there.

Steve: So he was robbed.

Zack: Yes, by someone or something that ate his face.

Steve: Going to find the other guys.

Zack: Before that happens, let's dip back into the action with Kurt. He flashes a huge stack of cash at the turtles and they sort of look at each other. Donatello reaches up to his big foam turtle head and he lifts it off. The face beneath his a hideous, noseless visage with milky white eyes and an unhealthy pallor.

Zack: Kurt probably knows enough to know that it is a ghoul. Not mindless like zombies.

Zack: You'd better hope he does, because he's about to do battle with the Teenage Mutant Ninja Turtles...next week!