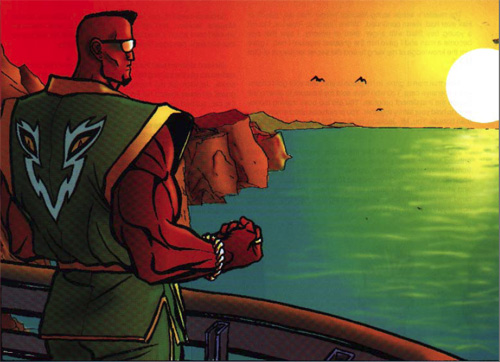 Zack: White Wolf has always loved to include page after page of fiction filler in their RPG books. At least back in the Street Fighter days they were still mostly using real fonts. A few years later they would switch over to a menagerie of unreadable handwriting font bullshit.

Steve: I always liked the stories, but I had to stop reading them because I can't read cursive very well. Even less well when it's in a bloody scrawl.

Zack: The reasonable font is no excuse for this bullshit. What is this?

Zack: Jackson looked out over the Pacific Ocean. The view made him remember his stereotypical black man behavior. He didn't care about being a black man stereotype. As a black man you don't see too many of his kind running kung fu schools.

Steve: It sounds racist when you put it like that.

Zack: It is racist. Street Fighter came from Japan and in Japan they view black men as somewhere between a monster and a dog. The White Wolf people softened that a little.

Steve: Street Fighter isn't racist, you're being ridiculous. Balrog was just supposed to be Mike Tyson. Just because this guy left his baby and wife behind to get rich in the high stakes game of kung fu dojoing doesn't make the story racist. If anything you're being reverse racist.

Zack: No, Steve, there's no such thing.

Steve: Yeah there is, I saw about it. It's when a black person does something racist against white people.

Steve: I don't know, you're putting me on the spot.

Zack: No, like what? I want an example of reverse racism.

Steve: If a black man saw a white man and called him a snowy.

Zack: I've never heard that term before. Give me some context.

Zack: So, it's a racist term for white people to be used during a dance competition?

Zack: Give me an example of a real person using it. How about Barack Obama?