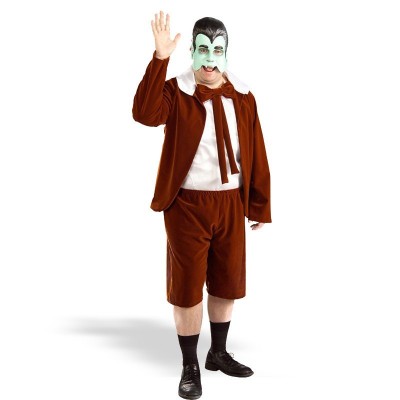 It's the kid from the Mockingbird Lane!

Zackula: Either that or he's entering his adult stage. Soon Eddie will fly away to find another dracula. In a frenzy of mating he will exhaust himself and die.

Dr. Thorpenstein: This is a modeling shot where you're supposed to be selling a product and making it look like it's cool, but even in those circumstances the guy still looks like he's going, "Oh, hey guys, my invitation must have gotten lost but here I am!"

Dr. Thorpenstein: So if you think about it, this is pro lighting and a nice camera, theoretically the best this costume could ever look, and this poor manchild is still broadcasting this air of humiliation and heartbreak.

Zackula: Like he just wandered in as they're wrapping up their photo shoot for Male Gladiator or Sexy Cleopatra and the whole place smells like body oil and success.

Dr. Thorpenstein: Yeah, I don't think the photographer told him to wave or anything, he just came in going, "Oh, hi, got the costume all ready!" and he hadn't even finished waving before the photographer was like, "OK, done, next, get the hell out of here."

Zackula: Maybe this is like one of those classic Hollywood stories where someone is plucked from obscurity by a producer and transformed into a star, only this guy was going through the trash behind a Big Lots filling a shopping cart with expired circus peanuts and some costume maker said, "Take a picture, I think we can make a costume of that" so they waved, he waved back, and the rest is history.

Dr. Thorpenstein: We've got some good theories around the hello angle, but I think the more likely scenario is this unflappable little trooper is cheerfully waving goodbye after another one of the stinging rejections that have characterized his entire adult life.

Dr. Thorpenstein: Or he's giving a nice big "God loves you!" to a carload of teenage girls who just drove by and called him a faggot.

Zackula: Yeah, it's pretty much a rejection costume. "Fatty dress up like a little monster kid. Comes with a monster mask. Sorry, you're going to have to pull your own black socks up to mid-shin."

Dr. Thorpenstein: "I know you're used to that shit, faggot" *speeds off*

Zackula: That coat and those shorts look like they would absorb an awful lot of thrown beer.

Dr. Thorpenstein: "Ow! Ha ha, yeah, maybe toss me another bottle, fella, looks like I didn't quite catch that one! No hard feelings!"

Zackula: "Oh! Thanks! Caught that one, just not where I expected to catch it! Well, bye! Your car really peels out good!"