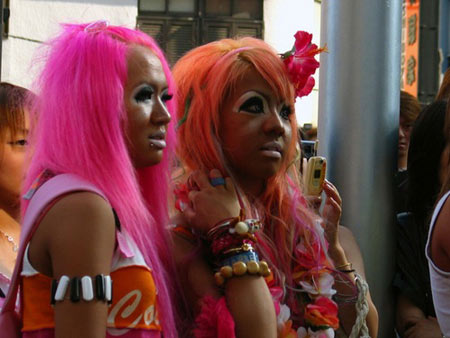 Zack:It's a little slice of California in downtown Tokyo. The smooth complexion of Edward James Olmos and makeup applied with a shovel, cuz that's how we roll in the OC.

Dr. Thorpe:Wow, divorced of its disturbing racial implications, blackface is really quite a compelling fashion idea. They look like glazed hams dipped in big buckets of trinkets.

Zack:Receding hairlines and puckered catcher's mitt skin are this year's "in look" for the ladies. I know, let's apply so much eye makeup that we look like a Batman villain.

Dr. Thorpe:That's not to say that California doesn't have its share of garish leather sex ghouls. But I never thought the women with pockmarked, sun-winkled faces and awful Venice Beach fashion sense were the people to imitate.

Zack:I bet when these girls wake up in the morning their sheets look like a colorized version of the Shroud of Turin.

Dr. Thorpe:Maybe I'm not looking at the big picture though. I'm too close to the situation. I can't see that imitating attractive people is played out. If you really want to be on the fashion vanguard, you have to imitate the horrible geriatric roller skate whores you see hanging out around the beaches. I wonder if they smoke two packs a day to get the authentic shredded-throat growl.

Zack:You know this whole ganguro thing is considered an "ethnic tribe" in Japan. A lot of these people don't dress up like this just on the weekends. They look like this all the time.

Dr. Thorpe:Jesus, the worst we have to deal with here are Hot Topic kids and guys who wear socks with sandals. But from what I've been led to believe, you can't walk ten feet in Tokyo without being ambushed by some sort of neon nightmare goblin.

Dr. Thorpe:I probably have an unfair opinion of Japan. People in Japan probably think they can't cross the street in America without being lassoed by a cowboy and put on the electric chair. But that's only true in about 25% of America.

Zack:Unfortunately, those are the parts of America that Japanese tourists would never visit. I'd love to see a story come down the AP wire about some ranch hand shooting one of these techno clowns thinking they were a Chupacabra come across the border to take his job.

Dr. Thorpe:You know, it's easy to look at old movies about the future and laugh at all the people dressed in silver jumpsuits, but that's really pretty tasteful compared to what we're actually seeing.

Zack:Yeah, all of the sudden I really want a tinfoil unitard with a big lightning bolt on the front.

Dr. Thorpe:I mean, even the people in "The Road Warrior" wore nice, respectable earth tones. These girls would have scared the competition senseless in the Thunderdome. "We may be part of a god-forsaken post-apocalyptic world of violence and terror, but Jesus, look at their hair! Run for your life, big giant guy whose shoulders I sit upon!"

Zack:In "The Road Warrior" everyone was dressed like Atlanta Falcons players after they fell into glue and metal shavings. They had machismo. They made you think of violence and bloodshed. They spent their time bolting sheet metal and machineguns onto tractors. These girls make me think of psychedelic unicorns and Clint Eastwood, and not the good Clint Eastwood either. I'm talking "Any Which Way But Loose" Clint Eastwood. They spend all their day text messaging each other and drinking some weird kind of canned juice with caffeine, licorice, and "squid pulp" in it.

Dr. Thorpe:They look like how the soundtrack to Dirty Harry sounds, and that's truly a horrific proposition.