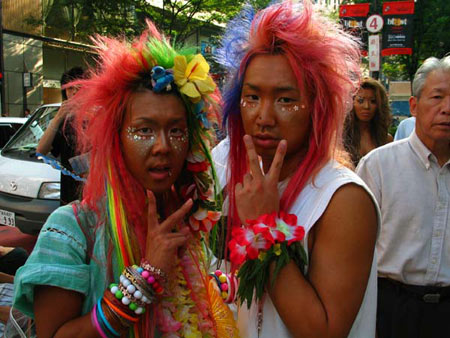 Dr. Thorpe:What do you get when you cross hippies with Care Bears? Scared, that's what.

Zack:I like the lei on his wrist. I bet if these guys ever walked off a plane in Hawaii Don Ho would smash a guitar over their heads. "Aloha means hello AND goodbye!"

Dr. Thorpe:You just gave me a deep, sinking feeling in my heart. I hope that Don Ho is never exposed to this madness. That thought alone brings a tear to my eye. I bet bracelet shops in Japan are like Starbucks in America. There are bracelet shops across the street from other bracelet shops.

Zack:It's like when you go shopping at Christmas and suddenly there are five Yankee Candle stores in the same mall. In Japan the bracelets are available year round. These guys are pretty much how I pictured the Langoliers in that Steven King novella.

Dr. Thorpe:I wonder if these guys have straight jobs, or if they're just Japan's idle rich. I can't imagine being led on a tour of an aquarium by one of these dudes, or seeing one on TV talking about continental drift.

Zack:Most of them are probably homeless. I wonder if they scream about Jesus or threaten to rape you when you're walking down the street like the crazy homeless people here in Chicago.

Dr. Thorpe:Well, see, these people have an outlet for their craziness. They probably don't have to scream and rant.

Zack:I don't know. It's like how you can't picture them having a normal job. I can't picture them doing anything other than screaming and squealing. It would be like if monkeys suddenly stopped making monkey sounds and when they opened their mouths new age instrumentals came out.

Zack:That's if you're lucky and your brain doesn't just Schiavo your ass the second it tries to process the image. You could not take out my feeding tube soon enough after being exposed to this in person. Oh man, I'm going to get hate mail over that one.

Dr. Thorpe:The image would be burned into your eyes like the Gauntlet intro screen on a cheap arcade machine.

Dr. Thorpe:I've always had this anthropological desire to find someone who'd been in a coma for thirty years and play him all the wild music that came out since his day, just to blow his poor mind. But showing him a picture of these guys would just be cruel. He'd relapse into a stupor instantly.

Zack:That would even scare the plaid right out of The Manatca.

Dr. Thorpe:Only Etro could defeat these monsters. We can only hope they don't forge some sort of unholy alliance.

Zack:We'll know if multicolored beards start appearing on these guys.