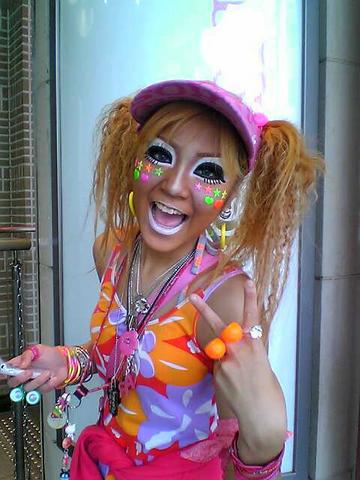 Zack:Ahh! Someone fell asleep in the Lucky Charms. She is wearing the perfect camouflage if she ever has to sneak through one of Timothy Leary's hallucinations.

Dr. Thorpe:Jesus, you know how in The Empire Strikes Back, Han Solo walks into that banquet room and sees Darth Vader, and even though he's like the president of the universe, Han Solo doesn't even stop to think about it for a second before he just pulls out a gun and starts blasting away at him because he's pure evil?

Zack:I think I know where you're going...

Dr. Thorpe:Well, I'd imagine that's the kind of response that seeing this thing in a dark alley would provoke.

Zack:There is no way this thing is making any sound other than a high-pitched monotone squeal. Like you just got a guitar too close to the amp.

Dr. Thorpe:That hand must be stuck in a twisted little peace-sign claw by now, and the hair is so permed, bleached and abused that if you touch it it disintegrates like one of those expanding black charcoal snakes you buy on the fourth of July.

Zack:I think that orange thing she has on her fingers is a spacer to keep her hand perpetually locked into the peace sign. She sleeps giving that peace sign in case anyone breaks into her room and decides to film a rape video.

Dr. Thorpe:And in her other hand she looks like she's holding a syringe, which is probably injecting sunless tanning tonic into her wrist as this photo is being taken.

Zack:There is no way that is anything but a cell phone. She is probably taking a picture of another girl giving a peace sign on the ground at her feet. Like it's a recursive Escher drawing of ganguro girls taking pictures of each other.

Dr. Thorpe:Escher would have had a stroke if he saw anything as surreal as this. This girl would have put some grey hairs in Salvador Dali's mustache, even.

Zack:Hell, this is what drove all of H.P. Lovecraft's identical protagonists crazy. "I traveled to the forbidden East and saw things of indescribable colors, plastic-fleshed and oddly-angled. Behind doors men's minds were not meant to visit."

Dr. Thorpe:She reminds me of this soap my friend has. Whenever I use the bathroom at his place, I use this soap and it smells really fruity and delicious, but if you try to eat it, all your illusions are crushed. What I mean is, if some poor soul tried to copulate with this creature out of some twisted Japanese-bred conception of cuteness, he'd probably end up bleeding, covered in neon goo, traumatized, and permanently sterile. But on the plus side, his genitals would be dyed a deep, rich sunless bronze.

Zack:You would pull her panties down with a creak like opening an Egyptian sarcophagus and she would shriek and take a picture of you with the camera phone that has replaced her vagina.

Zack:You know what, fuck it, I'm converting to Islam. I finally see the logic of it all. No more of this, inshallah.