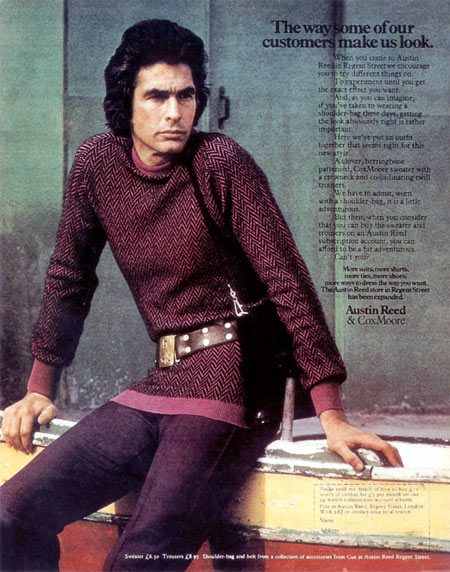 Zack:So...remember a minute ago when I was talking about Logan's Run. Yeah.

Dr. Thorpe:That purple tunic and that haircut are definitely giving me another impression. I think this is the model the artist who draws Prince Valiant uses. This guy has is ultra-mod, but at the same time he's got a certain "hey nonny nonny" quality to him that's impossible to ignore.

Zack:You're not quite sure whether his extra-tough belt has a pouch containing a phaser or a hand crossbow.

Dr. Thorpe:And that facial expression is so stern and rugged. It's like the Marlboro Man is moonlighting as an actor in a regional production of Hamlet.

Zack:Maybe that pattern on his shirt is some form of camouflage. Like the dystopian cities of the future will be covered in purple zig-zags.

Dr. Thorpe:I think he has an ailment in common with future pajamas man: your belt isn't holding up shit, brother.

Zack:His shirt is so long I'm not 100% sure those are pants. They might be leggings or tights, which would go with the whole Prince Valiant thing. The only way to be sure would be to see the waist of them, but I'm willing to bet his pants have an empire waistline.

Dr. Thorpe:Just like that thing on his shoulder. Is it a bitchin' wine skin, or is it just a purse?

Zack:I bet it's a nautical spyglass. Actually it's probably a kaleidoscope or, as I like to call it, the stupid man's television.

Dr. Thorpe:This guy is a conundrum because it's really impossible to tell just how fruity he is. He could be a badass or he could just pretty much be dressed like a girl. We'll never know.

Zack:Yeah, he looks rugged like our cave smoker guy, but the clothes and pose make him look more like the guy doing crosswords in his cartoon vomit underpants.

Dr. Thorpe:And the look on his face seems to say "come here and find out if I'm a pussy or not, son. I might scream like a girl or I might tie you a knot you ain't gonna forget."

Zack:Maybe these clothes are for absolute badasses who love to get into fights but hate being charged with assault. They just sissy-it-up at some roadhouse until a biker tries to wrap a chain around their head and then they bust out the Krav Maga.

Dr. Thorpe:Or maybe he's got that perplexed look because he's staring over at the panel next to him in the newspaper and reading Alley Oop.

Zack:Have you read the copy on this one? It's fucking apologetic. "We have to admit, worn with a shoulder bag, it is a little adventurous." That means "Look, we know it makes you look like a complete fanny blossom, but the guy came in with a shoulder bag and we had to work around it."

Dr. Thorpe:"Cut us some slack here. We make some fuckin' queer clothes. It ain't like there's a fuckin' manual."

Zack:Oh fashion, were ye only more like wine opening ye would be so easy.

Dr. Thorpe:Well, I guess this outfit is as close to wine as we'll get, since it looks like they just smashed red grapes into him and let him ferment.