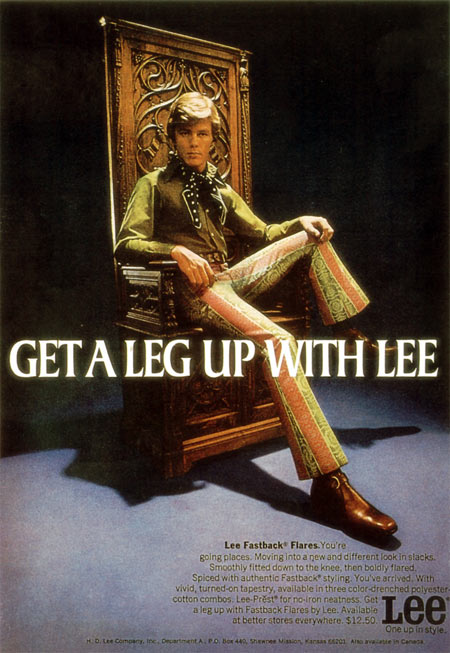 Zack:I'm getting the vibe that surreal imitations of cowboys were really popular back then.

Dr. Thorpe:Ever want to just dress up head to toe in orange in avocado green and sit in a throne? Well, maybe you've never injected Methedrine into your eyeballs while flipping the channels between Bonanza and Masterpiece Theatre.

Zack:Lee really lucked into that whole Buddy Lee gimmick if this is what they were riding on prior to that. I guess switching to jeans from pants that look like a seven layer salad was probably also a step in the right direction.

Dr. Thorpe:Man, back then people could put out ad copy that included the phrase "color-drenched polyester" without a hint of irony. It was an innocent and aesthetically revolting time.

Zack:I love the pretentious way they spell "Pressed" in their ad copy as well. They used an accent mark that I don't think I've seen outside of Scandinavia.

Dr. Thorpe:He's lifting his leg up like that because he's been sitting in that throne for hours and he's about to drench his polyester.

Zack:With color, of course. After all, even urine was paisley back then.

Dr. Thorpe:Yeah, it truly was, because of the swirling oil patterns in it from inhaling oily orange lacquer all day.

Zack:Wood was the plastic of the 1970s. They would cut down a tree and turn it into disposable diapers and picnic forks.

Dr. Thorpe:Only after coating it with an inch-thick layer of the greasiest stain they could find. Until it shone like the feathered hair of a polyester dandy.

Zack:They used to have something called "the spider test" where they would put a spider on the wood and if it didn't fall over or slide around then they would add more lacquer. You have to admit that throne is pretty boss though. I could picture Gandalf or some elf in a white robe sitting on that and then standing up and becoming distressed when they see the huge brown stain on their back.

Dr. Thorpe:A million years from now, scientists are going to clone humans from blood they find inside spiders encased in amber-like lacquer flows.

Zack:The really scary part is that the cloned humans are going to hatch from eggs and before you know it they will take over the park. An entire island in South America will be drenched in color and wood stain.

Dr. Thorpe:I guess this picture really just sums up the notion that men should dress like walking antique stores.

Zack:I wonder what Goodwill was selling in the 1970s. White t-shirts and blue jeans?

Dr. Thorpe:Yeah, and the jeans had five-inch cuffs at the ankles and the shirts had stretched out bits in the sleeve from rolling up a pack of smokes in them. Now we just go in there and find lacquer-stained polyester rags.