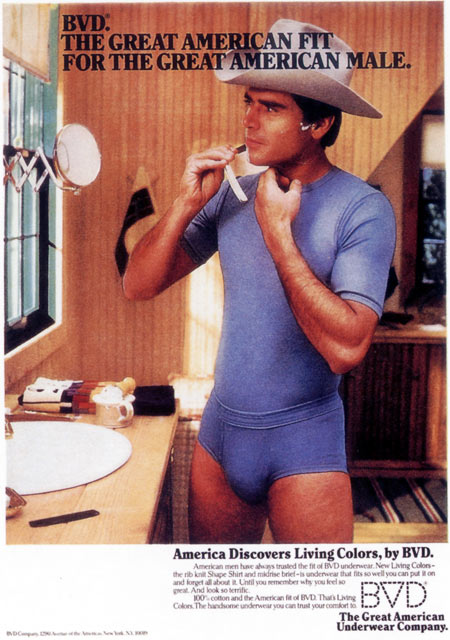 Zack:It's a real change of pace. Actually, I hate to say this, but finally here's a guy with a crotch bulge. Apparently the fashion industry chemical castration teams hadn't gotten to him yet.

Dr. Thorpe:Cowboys don't wear BVDs. Haven't these guys ever seen a Western? When cowboys take off their clothes they have huge baggy crimson one-piece long johns.

Zack:Cowboys also don't shave in the mirror with a straight razor. They use a buck knife and stare into their reflection in a stream.

Dr. Thorpe:And they're not wearing their hat, that's for sure. They've got it filled with creek water so they can rinse their shaving knife. BVD, you don't know shit about the Great American Male.

Zack:They've got to rinse the knife off because that's what they use to eat the pork and beans.

Dr. Thorpe:Maybe this guy isn't shaving. Maybe he's about to slit his own throat for being a disgrace to the cowboy code. Cowboy ritual suicide isn't a topic that's addressed openly in our culture, but at least BVD has the guts to speak out.

Zack:Tex has dishonored his family by not wearing long johns.

Dr. Thorpe:If a real cowboy wore underwear like this, his skin would just grow over it and get infected.

Zack:That actually might be a plus. He would have a thickened hide of scar tissue resistant to bullets from desperados and cattle rustlers.

Dr. Thorpe:If a cowboy gets shot in the gut, he takes it like a goddamn man. He limps back to El Paso and dies in Felina's arms. He doesn't hide from bullets. Jesus, this photo is shot like a Penthouse centerfold.

Dr. Thorpe:Fuck you Bob Guccione. You didn't get me, but lord knows how many innocents you corrupted by crossing the piss wire with the sex wire.

Zack:I can just imagine one of Guccione's loathsome henchmen going to a model's trailer before a shoot and forcing her to drink a half gallon of water.

Dr. Thorpe:I know for a fact that another SA writer, we'll call him Mack Larson, can't even get an erection without looking at a woman pissing in a Grecian urn.

Zack:Come to think of it I know of another SA writer, let's just say he's named Mavid Gorpe, who couldn't toss one off without seeing a dilated urinary tract and an improvised latrine.

Dr. Thorpe:Yeah, and I heard about this woman named Mack Larson's Mother who gives it out for free and don't care where she gets it from.

Zack:Oh really, well I heard that Mavid Gorpe's mother said the same thing last night when I was giving it to her! Booya!