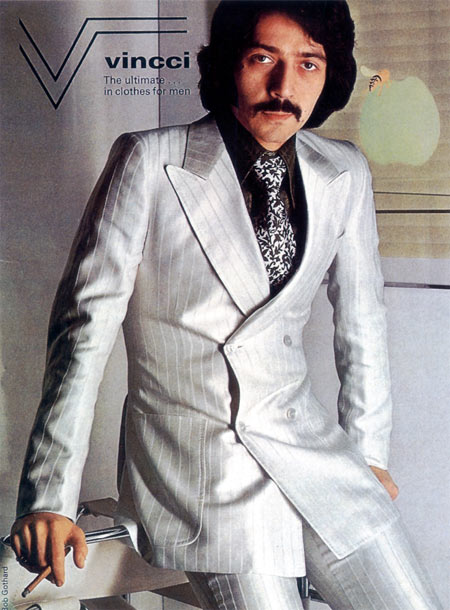 Dr. Thorpe:I would buy this suit. No shit. I mean, I would pay like a thousand dollars for it.

Zack:I can imagine this guy having some sort of surreal detective show like the Prisoner.

Dr. Thorpe:Oh man, you're right. That show would be amazing.

Zack:He's got the trademark cigarillos, the weird pastel green apple and hornet logo. He's perfect for an hour long action drama. One with some fucking incredible brass and harpsichord opening theme.

Dr. Thorpe:I think a good gimmick for him is that he's suicidal. Not like traumatized and despondent like Mel Gibson in Lethal Weapon, I mean he's suicidal because of his personal philosophies.

Zack:He believes that humans are a plague on the earth and the only reason he hasn't killed himself yet is that he wants to see the fall of mankind before he dies.

Dr. Thorpe:Look into his eyes, he has seen through society's grotesque facade of civilization. He's irresistible to women, but he finds no comfort in their embrace.

Zack:Some bad guy would try to intimidate him in every episode and he'd have a monologue where he demonstrates how little he cares for himself or the consequences of his actions.

Dr. Thorpe:He just pulls out a switchblade and jams it right through his own hand without flinching.

Zack:In the opening credits there would be a Salvador Dali-like sequence of him slitting his own eye open to remove a tracking device.

Dr. Thorpe:Absolutely. It's not that he can't feel pain; he just discards it as another banal human vestige. The ending credits show him pissing on an anthill with that same expression on his face.

Zack:His only friends would be a maniac blimp pilot who lives to inject almost random chemicals into his veins and a Babbage machine the size of a house that talks to him through a huge green scale computer screen. It would be called The Dauphin and it would give him his missions. They would be randomly generated and completely pointless.

Dr. Thorpe:The best thing about him is that he's not afraid to punch a beautiful woman right square in her beautiful face if it gets him an inch closer to completing the Dauphin's task. Even if that task is naming a hockey franchise.

Zack:"Deliver 73 bars of iron to the motel on 18th street and then cut the hand off senator Barnley."

Dr. Thorpe:"Yellowjacket, you must perform unnecessary surgery on the Count, before it is too late!"

Zack:The series would have some completely nihilistic ending like you realize that none of it is real and he's just in a chemically induced coma in some asylum after he murdered his wife and children.

Dr. Thorpe:I think every last one of our readers knows that this is the best idea for a TV show ever, but society just isn't ready for it.

Zack:Society never will be ready for Yellowjacket Greenapple.