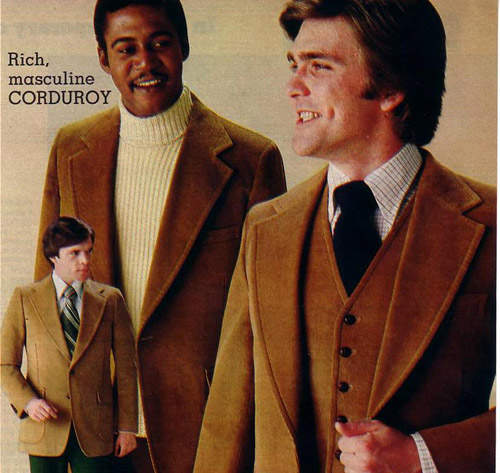 Zack:His smile looks painful. Maybe his corduroy has heated up from all of the friction and is searing his skin.

Dr. Thorpe:The guy on the left is thinking "hey... I bet I could fuck that dimple!"

Zack:He is to scale in this picture.

Dr. Thorpe:Every model has to have a homunculus. He uses the big version of himself for close-ups and the manikin for wide shots.

Zack:I can imagine that those giants are strangers to the land of tiny men. The tiny ones pray for smiling giant to sleep on his back in the rain so that the water collects in his dimples and they can use it to irrigate their crops.

Dr. Thorpe:Check out the face on the guy standing behind him. He looks like the big smiley dude just made some incredibly tacky sexist comment and he's smiling like "can you believe this son of a bitch?" and Dimples is just way too proud of his own awesome "poontang" joke.

Zack:"What do you say to a woman with two black eyes?" And the black guy is just smiling but shaking his head and thinking "for-shame, honkey."

Dr. Thorpe:That's what they mean by "rich" and "masculine." Pathetic overgrown frat boys. Man, will all our commentaries this week devolve into conversations about the president?

Zack:I hope not, because we've probably lost half of our audience by daring to joke about the president being shot.

Dr. Thorpe:Yeah, he's got the wherewithal to get the KKK to agree to some sort of "screwing championship," and he'd have his way with plenty of their women and then lose on purpose at the last minute so the Klan guys would feel good about being white and let him go on his way.

Zack:The tiny man would watch from the window in his constant impotent rage while Professor Hung violated the white and proud orifices of various degenerate Klanswomen. Klansperson? Is the Klan politically correct?

Dr. Thorpe:No, I bet the miniature guy would cheer him on. White or not, the Klan doesn't like him because he's a tiny white man owned by a black man. Plus, you can tell by his haircut that he's pretty hep.

Zack:He still hasn't learned the midget's most precious lesson: that being cute and capering will get you through life a lot easier than being surly about your size.

Dr. Thorpe:In ten years he'll have matured enough that he won't feel too bad about riding around on Professor Leroy's chest in one of those little baby-packs and waving at all the kids.