Christmas is right around the corner and you know what that means: time to pick out the perfect book of memes for that special someone in your life who will most definitely not immediately sever all contact with you after receiving such a gift. But how can you choose just one hilarious meme book, when Amazon has a listing of over 3,2000 of them? Our meme book buying guide will make shopping a snap for you this holiday season, and you can thank us by simply sending us large amounts of money. 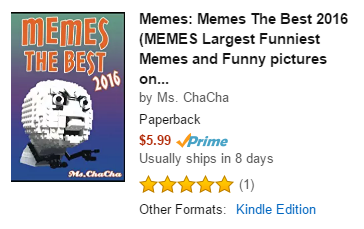 PERFECT FOR: Somebody new to the exciting, enchanting world of internet memes, such as people in comas or the elderly or the elderly in comas. Imagine grandmother joyously opening up this gift and being greeted by 84 different crudely drawn "RU MAD" images that appear to have been salvaged from the dumpster of a child abuse recovery clinic! She'll be so confused that she just might die, leaving you her bountiful inheritance, under one condition: you must survive a night in her spooky haunted castle. That shouldn't be a problem, assuming you're not a female, the gender I've learned are unable to fight ghosts.

PERFECT FOR: A friend / enemy who really wanted Hillary Clinton to win. Each page they turn you can mutter quietly in their ear "PEPE THE FROG IS SOME SORT OF METAPHOR FOR DONALD TRUMP OR MAYBE HITLER OR THAT OTHER GUY WHO WAS LIKE HITLER BUT HE PLAYED FOR RUSSIA OR SOMETHING AND YOUR CANDIDATE LOST THE ELECTION BUT PEPE WON." Also a wonderful gift for people who only have access to three different colored crayons. Please note that this book is only offered in "used & new" conditions, so you might end up purchasing an item that somebody with the mental prowess of mulch attempted to color in, but quickly gave up when they couldn't differentiate between the book and the table it was resting on. 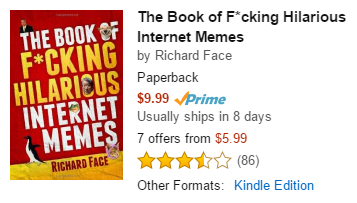 PERFECT FOR: Any individual who has been confined to a root cellar for over 19 years, forced to consume nothing but dirt, rocks, and occasionally their own hair, a prisoner of their own cruel, vicious, alcoholic stepfather who preaches his own twisted Word Of God through severe beatings with various gardening tools, who one day in an act of drunken enthusiasm accidentally let his guard down by turning his back, allowing him to be strangled to death by the prisoner's own metal shackles in a cruel twist of horrific irony that left only a blood-soaked corpse and a grim, vile sense of satisfaction. If they had this book then they could eat it. 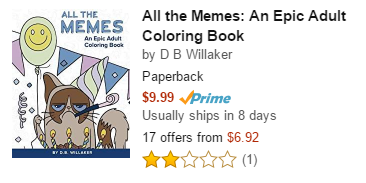 PERFECT FOR: The completionist in your life who requires the entire set or series of something no matter how degrading or worthless. According to this book's title, not only is it a coloring book for adults (that means the colors are too complicated for children, no stupid grade school shit like "brown," we're talking pro-grade coloring like "burnt sienna"), but it also contains "all the memes!" Every single meme! Ever! If you want proof, merely gaze upon the cover, which features the following "epic" memes:

Please be advised that the Venn diagram consisting of "people who like memes" and "adults" are nearly 50,000 miles away from overlapping each other. 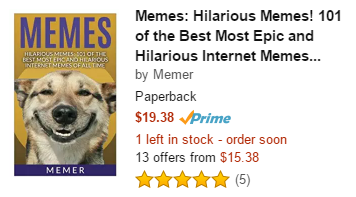 PERFECT FOR: People who see a direct correlation between the value of an item and the number of unnecessary words in its title. 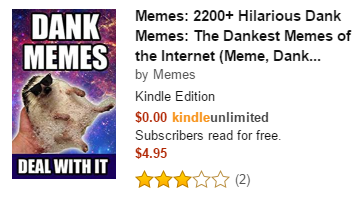 PERFECT FOR: The intellectually superior connoisseur of memes, one who can easily distinguish the subtle nuances and underlying characteristic of memes. For example, say there's a meme of a pig rolling in its own shit and the Impact font caption reads "LOL I ROLLIN IN MAH OWN SHIT." The average meme-enjoyer would simply think, "hurrrrrrrr funny image laugh hurrr text fun laugh more i like," while the meme connoisseur would remark, "hurrrrrrrrr not dank image no laugh need funny make danker meme hurrr no like fuck my life." Also some of the memes are apparently "XL" so they're still several sizes too small for the average meme fan to wear. 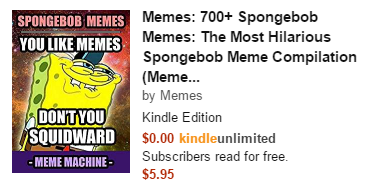 PERFECT FOR: Someone who has a Kindle Unlimited account and you know their password and you hate them a lot. 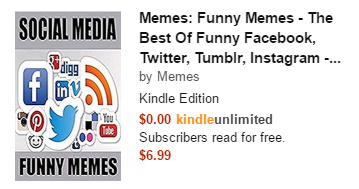 PERFECT FOR: Any friend or family member who loves their memes, but insists that they originate or at least appear on "social media." This exclusive book has weeded out all the memes that never made it to social media, like that one with the black box with the black image inside and the black text on it, or the meme that's only available on TV or to people who send in 1,000 General Mills cereal box tops. Additionally includes "fails," which is shorthand for "failures," which is what it's called when somebody tries to do something but they don't succeed in actually doing it, like financially capitalize on stolen images and content from the internet. 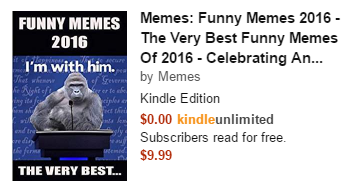 PERFECT FOR: Somebody choosing a coffee table book and it's either this one or "The Complete History of Lolicon." 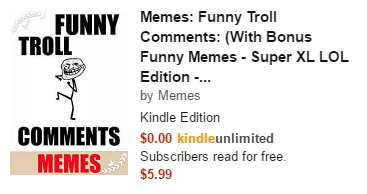 PERFECT FOR: Any friend of yours who has attempted to troll you unsuccessfully, like by saying "you look nice" or "hello." Why bother communicating like an actual human being when you can make "funny troll comments?" For example, instead of saying "you look nice," a "funny troll" could say something along the lines of "you look nice, a nice piece of shit that is," or something more clever and creative like "I hope you and your entire family die in a home fire, faggot." This is the only book in existence where the word "nigger" appears more frequently than all definite articles combined. 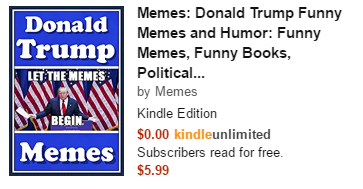 PERFECT FOR: The academic professor who enjoys biting, acerbic "political satire" that can only effectively be communicated through memes. For example, just imagine a photo of Hillary Clinton with the caption "DUMB BITCH" stamped across it! Not only is that dank as all hell, it's also cutting edge political satire and possibly also woke. As political pundits have repeatedly explained, Hillary Clinton lost this election because of all the memes and Pepe Frogs and Baskets of Deportables and also she lacked a big ol' blimp like Ron Paul's. Rehash all the fun and exciting insane words Donald Trump made come out of his mouth in crude meme format! It's like taking a shit on top of a shit sandwich but the rancid aftertaste and blinding shame burn for all eternity! 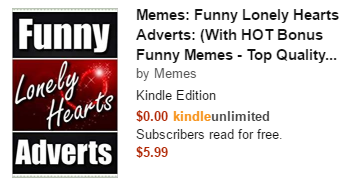 PERFECT FOR: Okay seriously this "Memes" author needs to have his internet access cut off like right now. Also his head. I don't care which one. 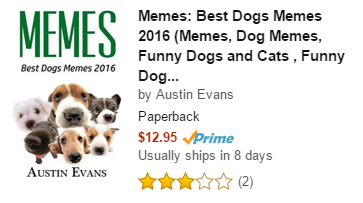 PERFECT FOR: Any animal aficionado who has ever thought, "boy, I sure do love dogs and cats, but I wish they were able to communicate in very, very, very poor English!" You see, animal memes are hilarious because some of the words are spelled phonetically as opposed to correctly, to infer the animal is not quite as intelligent as the typical human being that spends their days downloading memes and writing gay fan fiction about childrens' toy ponies. For example, there could be a cat with its head stuck in a jar. The hilarious meme caption would be "I CAN HAZ NOT SEE! HED 2 DARK!" This is funny because cats are dumb fucking assholes who piss in the back of your storage closet and you never notice it until months later when it has fully crystalized and the stench feels like hundreds of tiny AIDS needles piercing through the inside of your brain. Also for some reason this book is priced at $12.95, which seems a little steep in comparison to purchasing a marker and posterboard, then walking around town wearing a sign that reads "I AM WORLD'S WORST DUMB ASS PIECE OF SHIT PERSON." 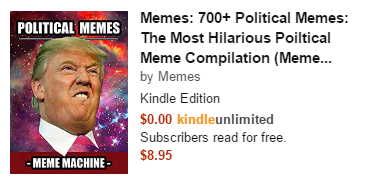 PERFECT FOR: I can't do this anymore. I'm sorry, I just can't. 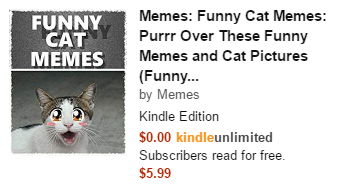 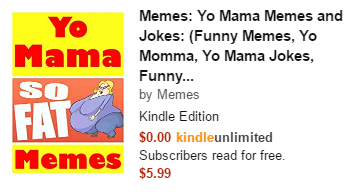 PERFECT FOR: SHUT DOWN THE FUCKING INTERNET. BURN IT DOWN. MAKE IT ALL GO AWAY. MY RAGING DREAMS OF EVER FLOWING BLOOD ARE FUELED BY THE BRACKISH, MALEVOLENT, SEETHING FURNACE OF UNBRIDLED DESPISE OF MEMES AND THE WORTHLESS SUBHUMAN CHUDS WHO ROUTINELY REGURGITATE AND SPREAD THEIR DISEASE THROUGHOUT THE PUBLIC LIKE THE BLACK PLAGUE. Oh, I guess this book would be perfect for somebody with a fat mother. 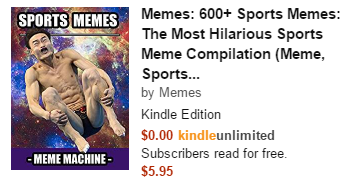 there is no god