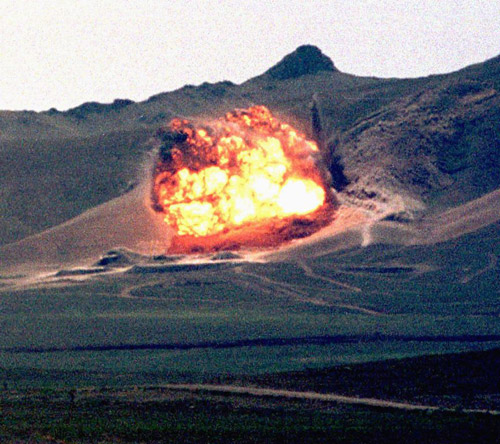 Zack:That looks like the kind of explosion you'd get when you mix up French sissy TNT with some Chiney cricket fireworks and try to blow up a girl's dress. It probably sounds like a fainting woman sighing.

Dr. Thorpe:Yeah, really. I like my giant tri-tip steaks pretty rare, but I don't think that explosion could even heat them up!

Zack:It couldn't take the primer off my Camaro.

Zack:Did you see that new bomb they made that can drop through an entire hospital without exploding and then burrow down into the Al Qaeda bunker underneath and then blow up with a nuclear explosion? That's more like it. Let's see the EU make something like that!

Dr. Thorpe:Yeah, instead they make pansy explosions like this one. I could lean into this thing to light my cigar and it wouldn't even make my cheeks rosy.

Zack:I've had bigger flare ups on the grill when I squirt lighter fluid onto the tops of my monsterburgers.

Dr. Thorpe:Did you hear about that new fifteen-pound burger everyone's talking about? You and I buy patties like that in rolls of 40, like quarters.

Zack:Yeah, that's for kids, I make ka-bobs with whole pigs and beef hocks.

Dr. Thorpe:And instead of using lighter fluid and charcoal, we cook them with premium gasoline and the cinders of Iraqis.

Zack:Hey after we're done with this do you want to grab some brewskis and then punch each other? I bet I could punch you harder.

Dr. Thorpe:You're on! Prepare to get punched, homo!

Zack:You're the homo, king homo! I'm going to wrestle you to the ground and squeeze your guts out!

Dr. Thorpe:I bet you're too chickenshit to take your homo clothes off and show me that big dick of yours, homo!

Zack:My dick is so much bigger than yours you can't even hope to measure it with anything smaller than your entire colon.

Dr. Thorpe:I think we should go back to clothes. Acting like a real American makes me realize why Republicans are so scared of gays. The repression just boils over.

Zack:Yeah, I think we should play it safe or we'll end up running male escort websites and asking softball questions to Scott McClellan at the White House press briefings.