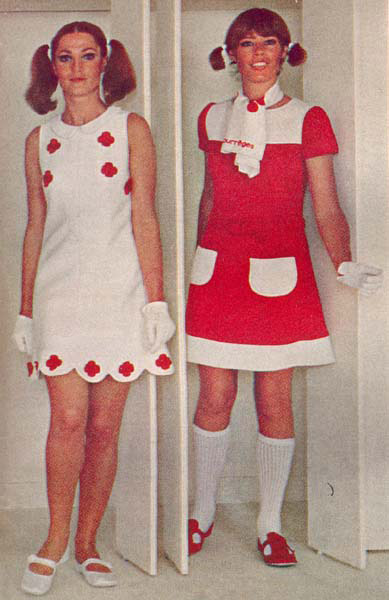 Zack:The robots have been activated!

Dr. Thorpe:You'd think mistakes like these would get ironed out way sooner in the fashion process, like at the drawing-board level. Do they really have to sew the whole outfits together before they realize they look like mod nursebots?

Zack:Why is the one on the right's face so red? Did she just flush with ingested blood?

Dr. Thorpe:She's murderously rosy. Or maybe that garish dress is just reflecting on her.

Zack:I like their dainty little gloves. They're probably lead-lined so they can handle the core fuel rods as part of their programmed duties.

Dr. Thorpe:Two of the little red crosses on the one on the left are right at nipple level, and then the two above that sort of give the impression of too many nipples. Like she's some sort of Island of Dr. Moreau cat person or something.

Zack:Those are just access points for her data cables, get your mind out of the gutter and back into the fantastic world of tomorrow. Speaking of which, as bad as these dresses are you know I would be wearing them if the alternative were those star-covered jean jackets.

Dr. Thorpe:And I'd definitely wear pigtails if the other option were a big blonde pompadour and fake WHAM! stubble.

Zack:"Ladies, no fire-engine red dress is complete without socks, sandals, and a lobster bib."

Dr. Thorpe:They're stepping out of their hibernation closets to face another day of tracking down unauthorized humans in the forbidden zone.

Zack:At least one of them is happy about it. She's the new recruit. The other one has hardened to the cruel world of endless violence for which they were constructed.

Dr. Thorpe:Ha! The redundancy of my words! All humans are unauthorized in the forbidden zone!

Zack:One of the robots will be destroyed before the day is over, the other - heavily damaged - will be taken in and repaired by an eccentric tinkerer in the wastelands of the forbidden zone. He will fix her, adjust her programming, and ultimately a muscley thick-neck will teach her that while robots cannot love, they can at least reroute fluid lubricant channels to simulate human sexual arousal.

Dr. Thorpe:And she'll have that same inscrutable grin when she eventually defies her software and snaps his sweaty neck.

Zack:The need to kill intruders is engrained on her very circuits. She will howl in a monotone as her software tells her to love and her hardware bids her kill.