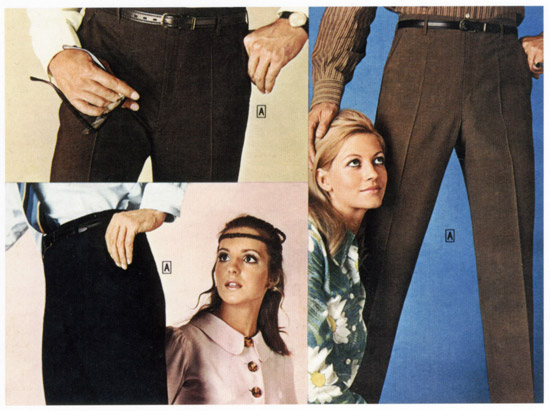 Zack: I think this photo really explains the time in history when guys could get away with calling a girl "pet" and not get slapped in the face. Nowadays if you said "bring me my trousers, pet" some woman from NOW would slide down a fire pole and chew your balls off like a swarm of rats.

Dr. Thorpe: Every day, I mourn the death of the Andy Capp era.

Zack: When men were expected - nay, encouraged - to stay out late drinking and then come home and abuse the ever-living shit out of their wife.

Dr. Thorpe: And the only consequence would be the occasional tumbleweed-shaped ball of fighting.

Dr. Thorpe: I wish the tailors in my town were hot quadriplegic women. Around here, the main tailor was this guy named Frank who ran Frank's Menswear, and they had this really bad reggae song about Frank's Menswear in the commercials. It wasn't even a jingle, it was a full song about menswear.

Zack: At least you had a normally named tailor. I remember back in my hometown in Ohio they used to show an ad for some wedding tailor called Zothkes or something. They didn't even bother trying to work that into a song. It was just this woman's voice saying "Where do you get...a green dress?" and then "Zotttthhkkkkeeeesss!" Hate to break it to you, Zothkes, but you can get a green dress just about anywhere.

Dr. Thorpe: What if I want a green dress fitted to me by a woman who kneels before me and gazes up at me with almost insane admiration?

Dr. Thorpe: Heck, I wouldn't even mind taking an occasional stroll to the Equipment Room if cripples looked like this.

Dr. Thorpe: She'll take it without complaint as long as you take her birdwatching the next day.

Zack: She just wants a friend. You don't have to love her as long as you're willing to take her to the roller rink so she can make all the kids cry during the hokey pokey.

Zack: Oh, she'll wheel her whole self in at the mention of every limb and with each spasm of shaking it all about tears will sweep through the munchkins like small pox.

Zack: Yeah, some days she'll just sit there with a bunch of candy on the edge of her little skateboard thing and wait to see if children can overcome their visceral horror and grab a mini-snickers. And if they do she'll cackle and say "now you have my disease!" and flap her little stumps at them.

Dr. Thorpe: That actually sounds like a lot of fun. At least I know that should something terrible happen to me, I can at least frighten children.

Zack: Yeah, that's pretty much all they've got. Every other ability has either been stripped completely or reduced to almost nothing but they suddenly find themselves almost super-powered when it comes to terrifying children. I mean, seriously, imagine the possibilities for a minute. You could have someone attach fake arms and legs and then drop you in a school classroom. Then you can pretend to get up and wail and all of your limbs will fall off spraying blood.

Dr. Thorpe: Hey, think of this: you could lie on the beach and pretend that your limbs are buried in the sand, and then you could call a child over and say "hey little buddy, I have to leave, how about unburying my arms and legs?" and when they do, you twitch your little stumps and say "OH GOD THE SAND JELLYFISH HAVE RIPPED MY LIMBS CLEAN AWAY!" And the child would be scared off the beach for the rest of his life, and his fear would give you power.

Zack: Or you could blame them. Just start screaming when the plastic shovel digs in and lift your little stump of an arm or leg up out of the sand. "YOU DID THIS TO ME!"

Dr. Thorpe: Or you could sneak up behind a child on the street and scream "THIS IS WHAT HAPPENS IF YOU LET YOUR MOMMY HUG YOU TOO MUCH!" Imagine the life-destroying neurosis that would cause.

Zack: So basically the lesson of this Fashion SWAT is that the handicapped are hateful little goblins that should be distrusted and shunned.

Dr. Thorpe: Yeah, they'll try to get you to do weird sexual things, they'll scare your kids, and they'll guilt-trip you into taking them birdwatching. All of them. Also, Eskimos are assholes and God's saving throws against fire magic have been drastically reduced by encounters with troll shamans.

Zack: I think this one turned out great because it's about learning and growing. If we can make just one person more wary of the handicapped then I think we've done our jobs.

Dr. Thorpe: If even one Eskimo is denied employment because of his ethnicity, then we've truly made a difference.