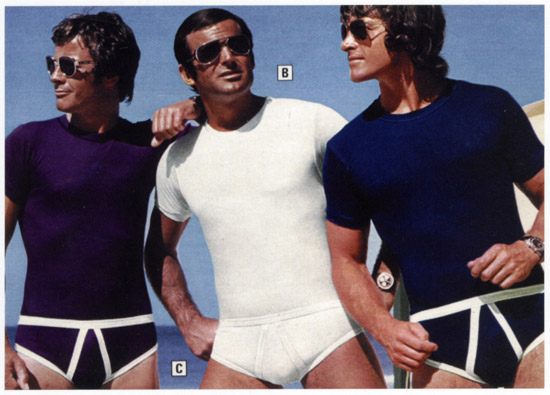 Dr. Thorpe: The photographer said "look to your right, everybody," and then right as he was about to take the picture, Billy showed up and said "'ey man, the photographer put you in white cause he thinks you're a pedophile, mate!" And the guy in the middle goes "what? I'll fucking kill him!"

Zack: That guy looks like a finely roasted turkey. His skin probably has the texture of a piece of jerky or tree bark. This picture was of course being taken back before the sun was out to get us all. When people let it bake them like a Christmas goose without any fear of skin cancer. Mostly because they'd all be dead from cigarettes and heart disease long before skin cancer could kill them.

Dr. Thorpe: The term "beefcake" originated because some guys sit in the sun too long and wind up smelling like burning roasts.

Zack: I bet these guys are in one of those beach bands that plays vaguely ethnic music but mostly just uses their music as an excuse to sit around the beach and bum free drinks from the bar. These guys are probably still out there, crisp as bacon, still with the bummed sea breeze and still with their shirt tucked safely into their underwear for the next gig. Only now instead of beach bunnies and swinging groovy hep cats they're playing to a bunch of octogenarians in the park pavilion who have been bused en masse to the performance and are generally pleased by any sound that isn't their oxygen tank's low level tone.

Dr. Thorpe: They're probably playing on some rich guy's yacht right now, and they're about to take a brief intermission to cram their faces full of catering and hit on somebody's sixteen-year-old daughter.

Zack: Really, you think these guys are yacht material? I figure them for living in public housing and playing sets at the British equivalent of the VFW hall for free fried fish and a two cup beer limit.

Dr. Thorpe: Yeah, maybe I was giving them too much credit. I just needed to place them in some context where they could still be sleazy.

Zack: After there gig they'd go around talking to all of these old vets about how they used to nail women constantly back in the beach days. Only really they all just slept with the same girl over and over and she was this skinny girl with braces who smelled like peanuts and worked the frozen banana stand.

Dr. Thorpe: But even if they had told the old vets that, they still wouldn't have believed them.

Dr. Thorpe: They still call each other at thee AM to talk about the good old days. They prefer to reminisce over the phone because they think the others can't detect the quaver in their voices when they start crying.

Zack: "Do you remember all the girls who used to show up to The Umbrellas concerts we used to throw?" "I can't take this anymore, Avery." "No, Duke, keep together. At least we aren't The Beachballs. Remember Tall Don Murphy? He's a quadruple amputee now. Follows the other guys around like a little mewling dog on his skateboard thing."

Dr. Thorpe: When they go out in public they still drop guitar picks when they're giving change for a bagel dog at the 7-11, hoping that the fat girl working the counter will say "oh, you play the guitar?"

Zack: Are you kidding me? These guys are way past dropping guitar picks to get attention. They walk around with ultra-faded t-shirts from their band and carry their instruments with them at all times.

Dr. Thorpe: And when they play their gigs at rest homes, sometimes the singer will say "let's play this one in B, fellas," even though they always play the song in B, thinking that their miniscule knowledge of music will take the edge off their air of desperation.

Zack: Then even that thin veneer of competency is stripped away when feedback makes one of the Alzheimer's patients start screaming "KILL THEM KILL THEM KILL THEM!" and the nurses rush in to take everyone to afternoon snack time.