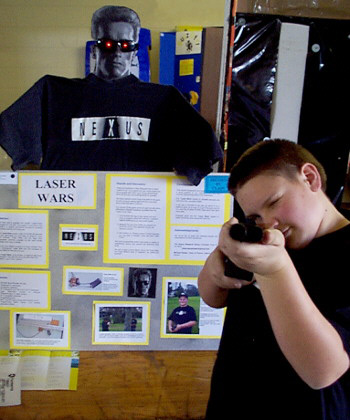 Zack: Laser Wars: Are they real and who is winning them?

Dr. Thorpe: He has not one but two photographs of the Terminator on his science project. In a few years, this kid is going to be disrupting his junior college philosophy of religion class on a daily basis with questions about The Matrix.

Zack: "But isn't Plato's Cave just about us being trapped in a computer simulation that repeats over and over?"

Dr. Thorpe: "So what you're saying is that attaining total enlightenment through decades of meditation is much like taking the red pill?"

Zack: Laser tag is the sport that was invented so that anti-social dorks can feel like they're good at something. There's a similar relation between pie-eating contests and fat people.

Zack: Hypothesis: Laser war is happening right now, in our streets, in our backyards and even in our homes.
Procedure: Purchase a season pass to Nexus Laser War Arena and play the crap out of laser war.
Conclusion: There is a hope for this future and it is me.

Dr. Thorpe: "Nobody will ever call me a pussy again."

Zack: He probably has a construction paper matted sheet up there with all his "kills" listed.

Zack: Shannon & Anthony, cute couple, I wasted them both in the red team's bunker

Zack: Delila, a clever girl, but not clever enough to outwit my laser fury

Zack: Matt, a big punk, he covered his laser sensor with tape and then shined his gun in my eye and made me fall and rip my shirt, luckily my mom made Nexus pay for the shirt and refund us for that day's laser belt fee.

Dr. Thorpe: Maybe there's also an illustrative story about one of his most intense battles. "Dusk fell hard on the Nexus arena. The smoke machines, already turned off for the night, coughed their final noxious death rattles. Nexus was closing, but the lingering smell of conflict still hung in the air. My bloody business that night was not yet complete."

Zack: "I worked my way up through the foam covered wooden boxes that the scum from Red Team were using to fortify their bunker. I could see their safety bracelets glittering in the dark, glittering...like the bombs that had fallen on my homeland. I executed a flawless evasion roll across the entrance, zapping two toddlers and their mother and making them cry. They begged to go home, but I had no quarter to give the likes of red team."

Dr. Thorpe: "Surrender is not in my vocabulary, and on this night, neither was 'we're closing.' The Nexus establishment tried to squash my righteous fury with their rules and regulations, but no jackbooted teenage employee could outwit me, the Laser Fox. Slipping into the darkness of the 'employees only' section and fortifying my position behind a mini fridge, I ensured that their search and destroy mission would last long into the night."

Zack: "With the siege entering its second hour I considered it a victory. I called for an extraction and smiled at the assistant manager as the gunship lifted off. It made a stop at the Arby's down the street as part of our night-long celebration of my warrior's victory."