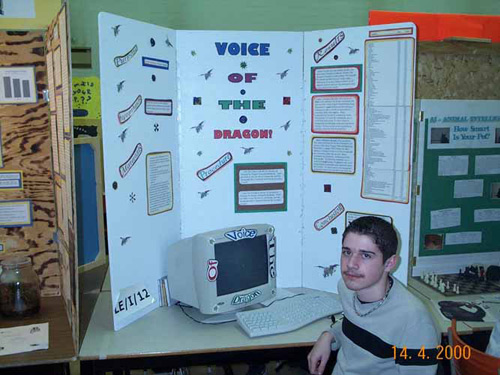 Zack: "No, seriously, I can't get him to stop. One day I just booted up my computer and bam, Voice of the Dragon. The only way to get him to shut up is to unplug everything."

Dr. Thorpe: I may seem meek and mild-mannered, but I will only withstand the torment of my oppressors for so long before I am forced to take action. When I release the Voice of the Dragon, Jefferson Middle School will have no choice but to bow before me and lick my shoes, for only I can harness the fury contained within this beige box of unspeakable power. The mortals who have treated me like a doormat for so long will tremble before his mighty bellow.

Zack: "It might be a virus, it might be some stupid program my sister, Kristen, installed on here because she's a big dumb baby, or it might, like be an actual dragon. It says some pretty crazy stuff sometimes. Basically, my hypothesis is that the Voice of the Dragon is a good dragon, and not an evil dragon. That he's here to help us any way he can, but because our technological world conflicts with his magical nature, he has been imprisoned inside my computer's PC Speaker."

Dr. Thorpe: That's it, keep them guessing... yes, pawns, let your feeble guard down. Let your curiosity overwhelm you. Come closer, mortals; you can't resist. Yes, perfectly harmless. Just a silly program. Soon, the Voice of the Dragon shall resonate through your bones, and you will all be my unwilling slaves, and you shall dance at the whim of the Dragon's mighty voice."

Zack: "My procedure has been to try inserting different disks into my computer. I put some shareware games on there and reinstalled my copy of Falcon 3.0. That had no affect on the Voice of the Dragon. I uninstalled some software my mom put on there for taxes and the stupid warez crap Kristen put on there. That had no effect so I ran Norton Antivirus and that did not detect a virus."

Zack: "My conclusion is that the Voice of the Dragon has to be a real dragon trapped inside my computer. I think he is trying to save humanity from some of the stuff he says and I definitely think that he is a good dragon. Would you like to hear him talk?"

Dr. Thorpe: Yes, my feeble pawns. Come closer. It is time for the Voice of the Dragon to be heard. It is time to surrender your will, once and forever, to the might of the terrible voice. You need only hear it once, for your feeble will shall crumble after he has uttered only a few words. Gather 'round, my children, my slaves, my disciples. When I press this button, your lives shall be forever surrendered to my control...