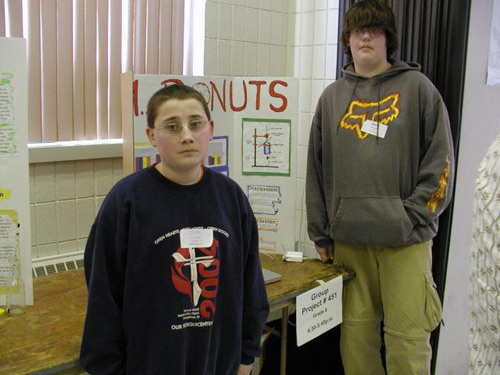 Dr. Thorpe: Look at the bulge in the ogre's cargo pants. I think he managed to smuggle a few out for later. "Dude, save a donut or two, maybe if we give them to Mr. Henderson he'll let us take another peek at the "Spurt" table."

Zack: Yeah, these two definitely have the hots for the Spurt girls. They had to go with a lame last minute "donuts" project because they spent their entire research time developing a dietary supplement that would allow them to win the "spurt off". Unfortunately, they were never called to serve.

Dr. Thorpe: They were really bitter because in home trials they absolutely smoked everyone who actually participated, so they had to drown their sorrows in fried treats.

Dr. Thorpe: "Kelly and Bree are such bitches, they knew they couldn't let nobodies like us win their stupid spurt contest because it would look bad for the school if some stupid jock didn't win it."

Zack: That's like the plot to an 80s teen sex comedy. Only instead of turning to donuts they use an Ouija board to summon Kelly Lebrock.