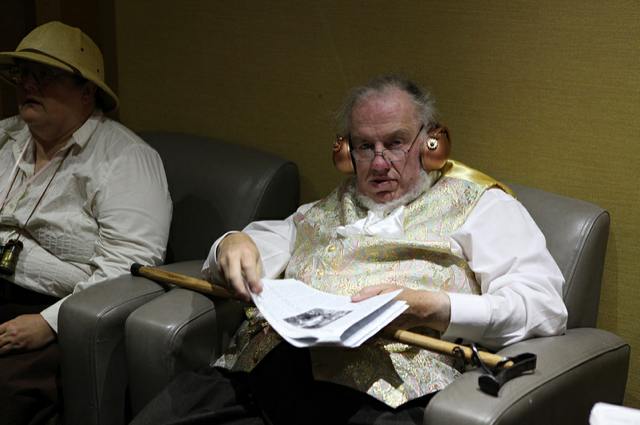 Zack: How dare you interrupt him while he is reading CLUNK!, America's only zine about retro vests for husky lads?

Dave: I think he's so annoyed because he was fucking THERE in the Victorian era, and it wasn't all top hats and corsets. You had to shit out the window, dogs were really mean and guys in furry hats made you swallow a shilling if you laughed when the Queen was in town.

Zack: DJ Lance Rock made you swallow a shilling?

Dave: DJ Lance Rock is American. It was Jamiroquai.

Dave: Didn't you watch any coverage of the Jubilee? Jamiroquai was out there on the London streets popping coins in the mouths of anyone who displayed a disrespectful amount of mirth.

Zack: I don't know about that but as soon as I heard about Prince Phillip going to hospital with a bladder infection I knew it had to be something involving Torchwood. Genderswapped anime Torchwood.

Dave: Don't believe the thing about the bladder infection. He urinated during the Jubilee, so Jamiroquai pop and locked up to him on a moving floor and shoved a rolled-up pound note into his urethra.

Zack: That wasn't punishment. "A quid up your pisspipe" is just a "thing" in the UK. It's like how "going on holiday" in Britain means sitting in a rusty camper on a beach that looks like the Army just finished carting away the tank traps and land mines.

Dave: Yeah, and you're actually supposed to listen to Jamiroquai's music and dance to it! Those crazy Brits.

Dave: But back to this sad fucking dude: he looks like a hotel dining room waiter who'd been working there for 60 years and finally slumped down on his favorite chair to die, then some asshole came and popped stupid headphones on him and took a picture.

Zack: I think of him more as a stereotypical cranky old man with a steampunk flare. "You lousy kids get off my cogs!"