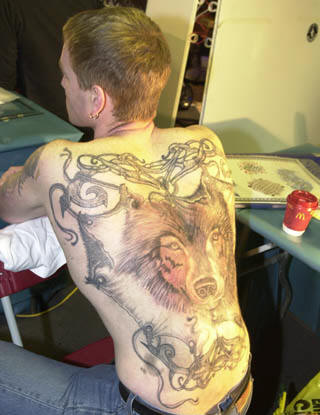 Zack: Oh man, I totally get the meaning of this tattoo. It symbolizes the fact that if you peel open this dude's skin you will find that at his heart he is Lassie.

Dr. Thorpe: I admire him for getting this tattoo, because usually guys with wolf shirts just wear them day after day without changing them, and they smell terrible. This is a much more hygenic way of having a permanent wolf shirt.

Zack: This is like one of those movies where a map is tattooed on the back of the pirate. Only instead a map of a wolf has been tattooed on the back of skinny white trash. A band of spunky kids are going to knock on his trailer door some day soon looking for the map that will lead them to the lost treasure of Chester Copperpot.

Dr. Thorpe: All they're going to find is a pregnant 14-year-old and six McDonald's Bucks.

Zack: It's just as well. It turns out that Chester Copperpot's lost treasure was a lesson about the true meaning of friendship and who really needs that? It just spared them the effort of a lengthy search and delivered the disappointment right up front.

Dr. Thorpe: You know, I think this guy has low self-esteem. This tattoo must have a message, because otherwise he wouldn't go through the pain and expense. The thing is, the only possible message delivered by this tattoo is "I am a total piece of shit." Maybe he's atoning for his sins or something.

Zack: Like maybe he killed a wolf when the brakes went out on his '81 Chevy pickup. Nah, who am I kidding, this guy has probably never seen a wolf. He wouldn't be able to manage something as cool as accidentally killing one.

Dr. Thorpe: He probably ran over a squirrel on his BMX.

Zack: More like he contracted Hepatitis A from drinking tap water during a municipal boil order. That's the wolf of hepatitis, comin' up out of the pipes after him.

Dr. Thorpe: That's beautiful. You should write a poem about that. Or maybe write a song and sell it to Tom Waits.

Zack: Yeah, I could definitely hear a saw playing to the story of Old Jack Wooley and his Hep-A.

Zack: (howled through a megaphone) "The wolf of the water, came up from the pipe, drank Old Jack Wooley, like time drinks your life."

Dr. Thorpe: Okay, this is getting too good. I think this tattoo is too good for him now. We're going to have to peel it off his back and sell it to the Rock and Roll Hall of Fame.

Zack: Yeah, I think we could talk to Kathleen Brennan about doing a full stage production based on this.