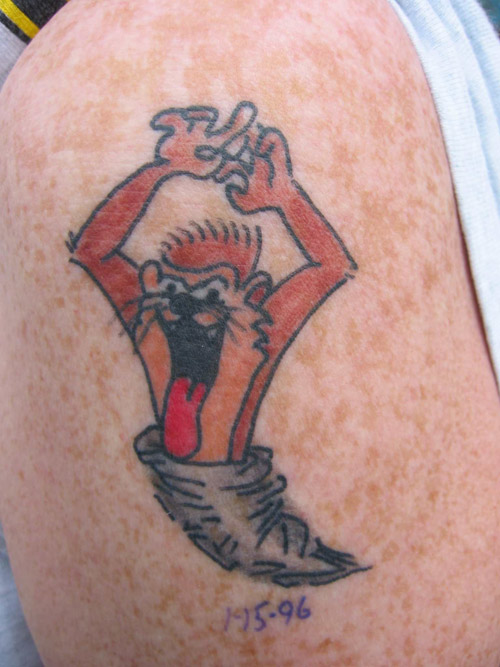 Dr. Thorpe: Taz looks like he lost a lot of weight. He also looks like he's participating in a potato sack race or something, because that tornado just isn't doing its job as representational art. Someone who isn't familiar with the character would probably think it was a monkey in a cocoon. Maybe it is a monkey in a cocoon, which is a pretty great tattoo, but it has the unfortunate effect of looking sort of like a terrible rendering of the Tasmanian Devil.

Zack: Maybe they could go and get it touched up by adding a banana in his hand, thus dispelling any illusion that it is Taz. Of course if they go to the same artist the banana is going to look like a penis and that's going to start a whole new set of problems.

Dr. Thorpe: You have to hand it to the artist for being thorough, though. Taz's tornado kicked up quite a dust storm. Unless those are freckles, which would be pretty lame.

Zack: It's like the person who did the tattoo has never seen Taz before and the person getting the tattoo just sort of vaguely described it to them. "He's got a big mouth and whiskers, some spiky hair, and a gray cone at the bottom."

Dr. Thorpe: Oh man, if this is a monkey emerging from a cocoon, I really like it. He looks so happy to be out of there! It's touching.

Zack: I can imagine some small town in the Midwest has about thirty people walking around with similar crude renderings of Warner Brothers characters. Bugs Bunny and his carrot probably look like a cat holding a bonsai tree.

Zack: The best part is you wouldn't even have to color in Porky Pig. Not that coloring seems to be something this artist is particularly interested in. It looks like he gave up about a centimeter from the tips of Taz's fingers.

Dr. Thorpe: Maybe she just got unlucky and went in right after the artist had a big fight with his mom. He was thinking "what if I am wasting my life?" the whole time, so he couldn't even be bothered.

Zack: At least we can say definitively that he is wasting his life.