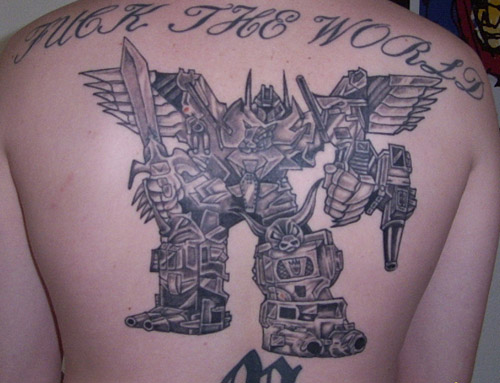 Dr. Thorpe: Now this is a guy who is absolutely unable to see past adolescence. And in a way I respect him for it.

Zack: If you're going to write "FUCK THE WORLD" over the top of a transformer you want it to look as classy as possible. Do it in a nice script style. Which tattoo do you think he got first? The Predacon or FUCK THE WORLD?

Dr. Thorpe: I think they were simultaneous. I see them as being related.

Zack: Remember when we were talking about souls earlier? This is the kid's soul. Right there. It's rare that it's visible like that but here it is. Deal with it.

Dr. Thorpe: Yeah. This is somehow more religious than the blood-weeping Jesus.

Dr. Thorpe: This kid had no safety net. Things should never have gotten this far. Didn't he have a big brother or a girlfriend or anyone to tell him what a dire queer he was going to look like?

Zack: That's the beauty of the Internet, man. You've got a whole world waiting for you to find a group of people who like the exact same stupid, weird, or deviant shit you do. You never have to face criticism unless you go looking for it. When reality intrudes it is your right, nay, your duty, to become as self-righteous as possible about the temerity of others to question your perfect worldview.

Dr. Thorpe: Well, you know what, I'm questioning this guy's worldview and there's not a thing he can do about it.

Dr. Thorpe: I like how there's a little hole in the Transformer around the freckle on his back. Somehow it brings it all home.

Zack: No matter how badly he wants to be that Predacon he is still a human after all.

Zack: He is a Triple Changer trapped in a man's body.

Dr. Thorpe: You know, the more I look at this picture, and the more I think back to all these other tattoos, the more I'm inclined to agree. Fuck the world. Fuck America, at least.

Zack: Yeah, that's really the only conclusion you can come to after this litany of offences we've just endured.

Dr. Thorpe: Hong Phan, try Switzerland or something. I hear the scenery's nice.

Zack: We're done for, Hong Phan. Save Yourself.