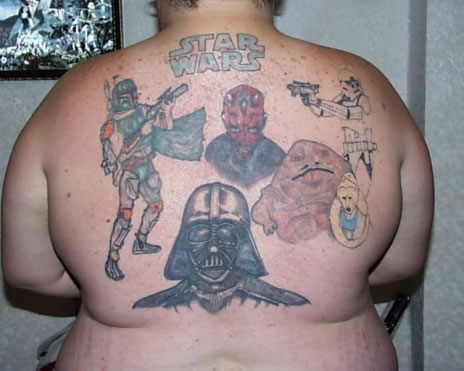 Zack: Bacne Wars! I hope the Millenium Falcon is up to doing the Striae Run in 12 parsecs

Dr. Thorpe: Maybe a woman, because of the hairlessness and the hourglass figure, but I'm really hoping it's a man because I don't want to have seen this woman without a shirt.

Zack: Meanwhile the Stormtrooper and Bobba Fet have teamed up to take care of some blackheads.

Dr. Thorpe: The bottom of Darth Vader's chin is a little too pronounced, so it looks like he's got his mouth open really wide and that grille is his teeth. He looks really surprised and a little scared.

Zack: I think he has sad eyes.

Zack: Okay, you know what, Jabba the Hutt is a bad choice for a tattoo. Really bad. But fine, you love "Star Wars" that much, put him on your back. But why did they add his tentacle-headed sidekick dude? Couldn't they have put Lando or Moff Tarkin or someone better there instead?

Dr. Thorpe: And isn't Jabba the Hutt supposed to be sort of green? He just looks like a giant discolored birthmark with a little frown drawn on it. And he's got that one little hand sticking out. It's kind of creepy, like maybe it's this person's little half-developed conjoined twin popping out of their back. Like the guy in "Total Recall."

Dr. Thorpe: This seems to be a decidedly Return of the Jedi-flavored scene, except that Darth Maul is there gumming up the operation.

Zack: Man, I just made myself sad. Imagine how bad it would have sucked to have been an obese dinosaur. There probably weren't many since wild animals are almost never really fat, but maybe there was some raptor with a glandular disorder that looked like a turkey drumstick dipped in green paint.

Dr. Thorpe: What the hell is Darth Maul doing there? He's never met Darth Vader! It's a historical anachronism.