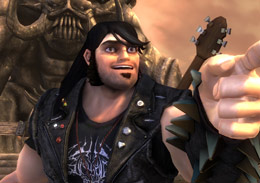 Maybe Brutal Legend will be this Jack Black fella's big break.Axe: Speaking of Voice actors, do you often plan a character around the voice actor first?

Tim: Never usually, except for the very beginning you never know who you are going to get for these parts. I never thought we where going to get Jack Black, we thought of Jack a lot, having this character who is so heart felt, like really into rock, just loved music, nothing ironic about it, he's just there to fucking rock. He loved it, just like in School of Rock, that guy is just, he's not ironically into Iron Maiden. He ended up looking a lot like Jack Black. Then we found out he played Psychonauts, our previous game and he really liked it and we figured maybe we would have a shot.

We had this meeting with him at the Four Seasons, just me, I went to the Four Seasons, sat around the pool and showed him concept art, he liked it and signed up for it. Then I had to write more dialog, there are like 30,000 lines of dialog in the game by the end of it and more then 3,000 of those are attacks. So then I started writing for him, having him in mind while I was writing so some of it was not written for him and some of it was written just for him. And when he does the readings he makes it his own, he improvises and customized it with his own voice.

Axe: Old school question, of all the characters you have created, do you have a favorite?

Tim: Well, you know, I've always loved Glottis (from Grim Fandango) have you played that game?

Axe: That's one of my favorites. I consider it one of the best stories ever written, even outside of games.

Tim: Thanks for playing, but I mean he was just more then having been what I wrote, he was something more. Something about that last scene where they are hugging each other, I always get kind of sad watching that scene, just the way he read those lines, Alan Blumenfeld, the actor, he was really great.

Manny Calavera, you know, Tony Plana who later showed up on Ugly Betty, like on a hit TV show, as Ugly Betty's dad. If you watch it, it's really funny to all of the sudden hear Manny Calavera's voice come out of the TV set.

Manny is a favorite character, and Hoagie, the original roadie, the character, I always wanted to do something with Roadies and Hoagie was a touch on that, but I think Eddie Riggs (star of Brutal Legend) really take it down, I think Eddie might be my favorite of all time, because I've been with him for so long and when he did Raz too, okay, Raz and Void too, who is done by the same actor who did Glottis. There you go, I think if you keep talking to me I'll just name each one.

Axe: Well, they are all pretty good, I like them too. With the new trend in adventure games coming back, sometimes they go away, sometimes they come back, but it seems like Taletale is really looking for... 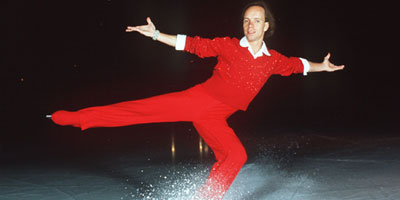 
Tim: Oh, it's just Scott Hamilton (Tim puts the phone down), well Taletale never stopped really, that team was working on Sam and Max 2 at LucasArts and then that got canned and they left and formed Taletale. So they never really stopped making adventure games since the old day, so they are really believers you know. I think once at LucasArts I was asking management, "Do you guys even want us to make adventure games, you don't seem to want us to make them, you are always trying to get us to not make them anymore".