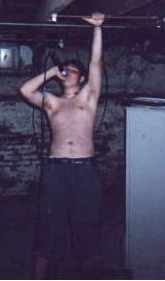 SiGN ThE GueSTBooK WhiLe You heRe, iT'S The eaSieST WaY To LeaVe YouR MaRK oN ouR SiTe WiThouT haViNG To Pee on Your MoNiToR

This single sentence is an open window to their dark and disturbed souls. Not only do they want each and every guest to leave some kind of notice telling the entire world that they did in fact visit the "SNAFU" website, but they also suggest some kind of potential submissive urination fascination. The act of peeing on somebody else's property is representative of a dominant trait, a characteristic that shows the rest of the population that you are stronger than your target. This, combined with the random capital letters, proves that not only are the members of "SNAFU" submissive creatures with a deep-seated sense of inadequacy they try to cover up, but they are also "big stupid dumb morons" (clinical term).

This site is like the html-based equivalent of Richard Simmons having sex with a bowl of Jello but slightly more arousing...and a bit less messy.

I believe this statement speaks well for itself.

SnaFU is on top of shit now! We still ain't gettin our own own show, but it's a battle of the bands, so after we win they gonna know whos owns them! its at PEABODYS,so get your ass out there!!! You can get your tickets at the door or CONTACT ONE OF US to get one of our available 49 tickets!!! WE NEED EVERYONE OF YOU OUT THERE! ITS JUDGED ON NOISE AND PIT! WE GOTTA OWN ALL THAT SHIT!!!

Once again, another human waste reference. Perhaps their fascination with excrement and urine is not as indicative of submission, as it is of a reflection upon the quality of their own music. Under that theory, let us examine a few of their songs, beginning with "DaYZE of HaZe":

Sittin here watchin cars go by. music in the background. wonderin why life is the way it is. Why am I here????

I would guess they are watching cars go by because there's not much else to do when holding up a cardboard "WILL RAP 4 FOOD" sign on the corner of the street. I cannot answer why they hear music in the background, as I haven't had too much experience with schizophrenics.

Dayz pass and my life is still a mess. People talk and act like a pest. This shit has gone to far. Where do I stand. Im Slippin in the muthaphukin Sand.

They believe their life is "still a mess" primarily because of the submissive urination / defecation obsession they have. It is not a very clean hobby and results in very "messy" situations. Might I suggest a less disgusting pastime such as collecting stamps or injecting window cleaner into their neck?

Dont know what to do look in around. paranoid. Everything is a mystery. Cuz dayz go by and we still dont know whats goin on. We have to live for today.

Many domestic animals, such as gerbils and brain damaged cats, are not fully aware of what's going on around them. They too "live for today", simply watching the world move around them. Perhaps these lyrics were inspired by some kind of household tool or implement which confused the members of "SNAFU", such as a can opener or toothpick.

People waste my air with ignorance. They are slefish. You don't ever help. look dumb. Fuck You. Believe lie. 9-5. Never gonna be nothing but a robot. So Fuck you and your shit!

I will not even bother pointing out the interesting contrast between calling people "ignorant" and then misspelling "selfish" in the following sentence. I do find the statement commanding their fans to "look dumb" to be interesting, as it's probably a safe assumption to believe that any fan of "SNAFU" has already successfully achieved that look. Once again, the lyrics end with a reference to having sex with feces, suggesting that perhaps "SNAFU" does not really understand the true purpose of sex.

Step off my toes. We aint livin like hoes. Make an impact. Thats a fact. Were gonna hit back. Staight from the fuckin sac!!

"Staight from the fuckin sac"? So am I to believe that the members of "SNAFU" are simply aggressive boxing sperm? Interesting!