step off , step back kiss my muthafuckin ass crazk fuckin fag wanna be, drag queen never be what u see...

"SNAFU" is apparently a band with deep-seated homosexual undertones, as comments such as "fucking fag wanna be" suggests that their group's audience, who traditionally desires to emulate the people they're fans of, wants to be homosexual like them. The author also commands their fans to place their lips on his rear end, which further supports this theory.

I do not believe so, because I have the ability to spell "you" correctly, something this band seems to lack. Well, that and a firm grasp of reality.

The following is a brief yet detailed analysis of some "SNAFU" band members. Although it should not be taken as fact, it pretty much is.

iNDePeNDaNT ViNCe - If You See SomEONe On STagE weaRINg a Damn GOofy Hat an An Independent Cro§§ itS VinCe. Vine PLayS guitar And is the Goofist person u wiLL eVer Meet, No AttentIOn Span, buT you WOuld Laugh Your Ass Off If U ever watcHED Him or tried to Carry on a ConverSatIOn With Him.

Analysis: "iNDePeNDaNT ViNCe" chooses to assert his individuality by:

A) wearing a hat,
B) writing like a mental invalid.

Judging my his description, iNDePeNDaNT ViNCe has some kind of Attention Deficit Disorder, perhaps a fatal case. Let's hope at least. According to his bio, anybody who has a conversation with iNDePeNDaNT ViNCe ends up laughing at him, which would explain why "Snafu's" lyrics are so violent and abusive.

oLiVeR(LiPS) - OliVer Is Snafu's Bassist. Hes BrinGS a DifferEnt Kinda FeeL To My Damn NIgger RiggEd Garage. He is A kIcK Ass PersOn and he can PLay The FucK OUt Of a Ba§§ w/ his goofy bass face (lips).

Analysis: oLiVeR (who's name is written differently each time) obviously brings "a different kinda feel" to the band because he is described as being able to actually play his instrument. It is my belief that oLiVeR is not a real member of the band, but is merely a homeless drifter who had the unfortunate experience to wander into "Snafu's" "Damn Nigger Rigged Garage." I am not quite sure what a "Nigger Rigged Garage" is, but it sounds like a trap to ensnare minorities, maybe in an attempt to recruit new band members? Ones who perhaps aren't suburban white children who believe they're full of rage because mom made them take their sister to band practice? 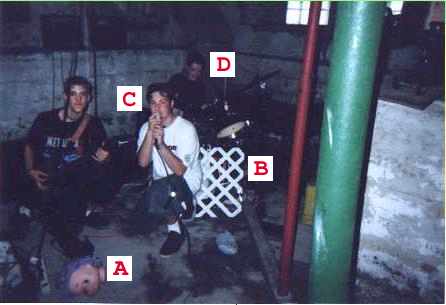 A. - A doll's head. This is perhaps a sign of rebellion, such as telling their parents they can "go to hell" because they refuse to share the last Snicker's bar with their sister.
B. - Some stolen lattice. A slap across the face of society as if to say, "we're pissed off and cannot be contained! Everybody with rose gardens better watch out, 'cause no lattice or plant-support system is safe from us!"
C. - The two main performers are down on their knees. I will allow you to interpret this however you'd like.
D. - They appear to be practicing in the house from "The Blair Witch Project." One can only hope they suffer the same fate as the people in that film.

Although "SNAFU" poses no real threat to society, I believe that they have some serious mental issues which must be addressed as soon as possible. The band seems to be obsessed with homosexual sex, urine / feces, funneling all their anger from being beaten up in gym class, and getting as much attention as possible from acting like mental patients who have access to a broken computer keyboard and distortion pedals.