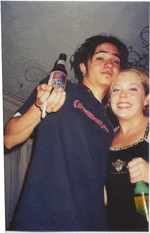 I am fairly sure that if I do not get my shit straight, the members of "SNAFU" will be more than eager to straighten it out for me. At least five times.

Actually, that is simply four words and a capital letter. However, I will exercise my option to call them what I want. Look for it in my upcoming book, "Dumbasses of America."

Get your fuckin shit straight!!!

I believe we have already covered the "shit straightening" topic. I find it interesting that they continue to expand on the subject.

Let us examine another example of their work, a promising bunch of lyrics entitled, "ReAsOnS" (I'm not sure how that would be pronounced during their concert):

Multiple reason bring us together, many make one doing this shit for fun, cant stop us making this body drop, FUCK THE COPS.

Multiple reasons do bring people together, but I would guess the main reason all of "Snafu's" fans would be in one place is probably thanks to a special showing of "Pokemon 2000". I do not really understand how "FUCK THE COPS" works into this theory, but I assume that's just a phrase the kids heard on some rap CD which was shipped to them via Columbia House's "1000 CDs for the price of 1 cent!" promotional deal.

We have our reasons, you dont need to know more. you dont wanna be out and lost, shit like that has a cost.

So now they are paying people to satisfy their submissive defecation fantasies? This is indeed a bad sign, signaling a progression into their downward spiral of madness.

Back the fuck off brfore you get put back, piss me off and ill make your ass role second class. we were brought together by our similarities, you aboused the fact that you were my "DOGG" turns out your nothing but a two faced rat, Muthafucka now you can meet my baseball bat.

Now the spelling mistakes are piling up fast and furious. As far as I can tell, the author is quite perturbed that somebody acting as his pet dog (do aggressive boxing sperm even have pets?) decided to metamorphosize into a rat with two heads. This suggests some heavy drug usage by the author, as such visually disturbing imagery is not commonplace with the non-psychotic members of society. The paragraph concludes with the threat of physical violence or perhaps a reference to the author's genitalia (in which case the baseball bat would bunt a lot).

You put your prude ass upturned nose where it didnt belong, you fucked up, now i take you apart.

This sentence is particularly difficult to decipher. I believe the author's distorted vision of the human body (since when were noses near the rear?) could be tributed to the same drugs which are responsible for the hallucination of two headed rats (see above). Perhaps this is simply due to the band practicing in a poorly ventilated garage that dad spends all day painting the car in. Keep in mind that this is just a theory; chances are fairly high that any father of a "SNAFU" member abandoned his family long ago.

get the fuck back step off my nut sac

A trampling fetish perhaps? Interesting... perhaps this is even the same "nut sac" that the aggressive boxing sperm that sees two-headed rats came from originally?

No, I do not in fact know, know KNOW!!!!!!!!!!! The poor grasp of the English language combined with the disturbing visual imagery and repeated references to scat makes "Snafu's" lyrics particularly difficult to grasp.

As previously stated, I am not quite sure. Ever since the first moment I viewed their webpage, I could physically feel my brain imploding.