The Secret Diary of a Grand Theft Auto Call Girl 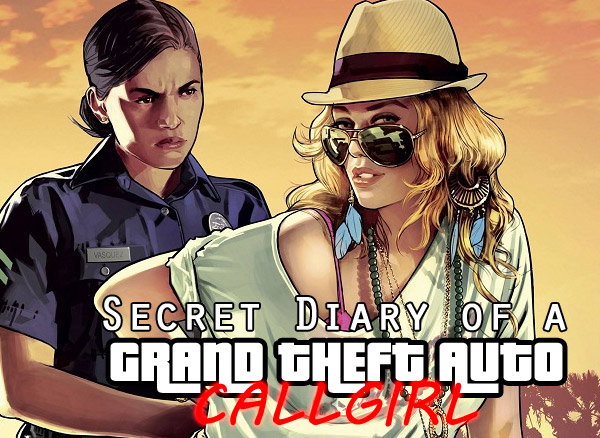 "Christy" is the pseudonym of a sex worker in the San Andreas area, primarily in Los Santos. She has been involved in prostitution since the 1990s and has kept a diary of notable events. They provide a unique insight into the strange and difficult life of a "working girl." Be warned, the language and situations are for mature audiences. 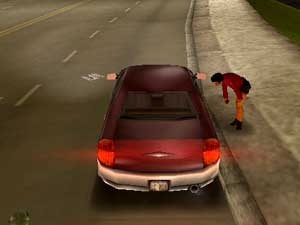 Rough night. I was working Vinewood and I got into a car with a john I've never seen before. I figured it was okay since it was a nice car. A little banged up, but nice. Before I can even get two words out he is driving down an alley smashing into the walls. I told him he needed to watch it, but then he sort of went crazy or something because the next thing I know he is driving us both off a pier and into the ocean. I was lucky to get out of the car before it sunk. The asshole never even paid me either. Never said sorry or anything. He just swam away and last I saw him he was in an identical car driving up a staircase. If my comically stereotypical pimp, Jon-Jon, ever catches this guy, he is going to mess him up.

Had a weird one tonight. I was walking back and forth on the sidewalk, bumping into people and struggling to get up a curb, when I hear this explosion from a block over. Total mayhem ensues. This guy is driving over people, everybody is screaming, and the cops are chasing him all over. It's like what happened a couple weeks ago on the news. The guy is throwing grenades, shooting machine guns, it's insane. Well then he gets into a red minivan and drives into a Pay 'n' Spray and he totally fucking disappears. Like poof! Just gone. The cops are all scratching their heads, nobody knows what's up. This guy in a blue minivan pulls up and wants to party so I get in and I'm like, "Hey, you will not believe what just happened." 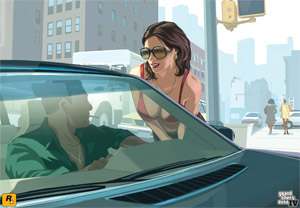 I was in East Beach and got picked up by a john. Things started out nice, he's got a Pegassi, I'm like, "Are you a movie star?" He floors it. Which was fun for a while, but then he started driving so fast it was making me crazy. Like so fast I couldn't even see any highway or building in front of me, just these weird sort of colored squares up ahead. I'm like, "Am I losing my mind here, what is happening?" Then out of nowhere he drives right into a wall, flies through the windshield and lands in somebody's front yard. Million to one chance that he is alive but then he gets up, runs away like nothing happened, and leaves me sitting in his brand new car. I should have taken it instead of getting out and running away screaming.

A guy covered in blood and barely conscious said if he didn't get a BJ he was going to die. Sure, why not? What's the worst that could happen? Turns out the worst that could happen is he drives you up onto the roof of a parking garage and throws molotov cocktails at people until the police shoot him from a helicopter. I was stuck up there until, luckily, the guy's dead body disappeared and the car I was in ceased to exist. What a nightmare.

Hey, "CJ," if that is even your name, you're the asshole in the tuxedo who drove his car off the top of a mountain with me in it: I'm glad you have a parachute. Some of us don't. Think about that next time. Oh, and please don't shoot the ambulance drivers that come to take me to the hospital. I mean, seriously? 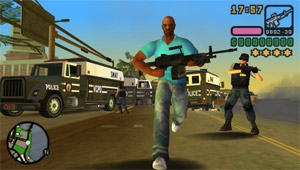 This one is to all you johns that just don't understand why a girl has got to work these streets. Sometimes you need a fix, sometimes you've got too many bills and it feels like they're going to crush you, and sometimes somebody is making you do it. And every time you do a party you turn around and get drove over by some asshole who takes all your money. You think that is funny? You're a psychopath. Did you drive over me because you have a tiny dick or because you're so powerless in your real life you have to live out some deranged, misogynistic fantasy on a working girl like me? I am a human being. I have family and friends and kids that I don't let out of the house because if I did you would be laughing and driving over them and taking their money too.

Some girls will tell you that the key to working the streets is to have fun with it, enjoy what you're doing. They're full of it. It's all about getting things done efficiently. The key is to refine your technique until you can take care of business in five to six seconds. You know what kind of muscles it takes? You try to make a car bounce up and down with one hand.

Alright, I quit. I just saw a guy in a bowler hat and suit crash a helicopter and then ride a mini-bicycle past my usual corner shooting Tec-9s at the army. There is not enough money in this town to get me to keep working these streets. I'm leaving. I hear Vice City is nice.