What's crackelating, rap fans? Welcome to Randy's Rap Report, your one-stop info shop for the urban sensation that's sweeping the nation! From the dangerous streets of gangster-rap pioneers to the computer-filled cubicles of "nerdcore" swagger-jockeys, if it happens in the world of rap music, you'll read about it on Randy's Rap Report!

Sup guys? I know ya'll are expecting some comedy, but I hope you don't mind if I break it down a little bit with a serious story. A tale of hard-rocking rhymes and hard-knock living. A story about a little boy from the mean streets of Mobile named Little Randy.

This scrappy little guy grew up hard as a latchkey kid with an ax to grind and a chip on his shoulder on account of his mom and dad not caring so much about his well-being and working pretty late on weekdays and also never giving him an allowance like lots of other kids his age.

Little Randy was a petulant kid who was basically nothing but trouble. All he did all day long was watch pro wrestling on television and steal White Mystery-flavor Airheads from the 7-11. Sometimes he went to school, but he always got bad grades even though he was actually really smart. The teachers didn't understand the sort of intelligence he had, which was something called "genius," and that is hard for normal people to grasp. So all the teachers hated him for it and made him do extra homework, and once Mr. Arnold called him an "asshole" in front of the entire class. Usually if he did go to school he spent most of the time taking bets on the flavor of the white mystery Airheads. 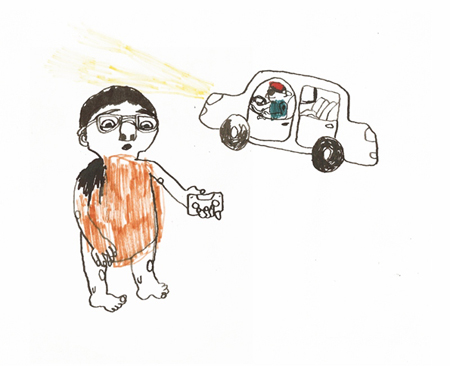 One day, Little Randy was hanging out with his friends outside of Winn-Dixie when a beat-up car drove by blasting some bangin' beats. BOOM! BA-BOOM BOOM! BOOM! BA-BOOM BOOM! Randy had never heard rap music before, but he knew right away that he had to learn more about the soul-thumpin' sound rattling the windows of Sally's Beauty Supply and the other stores in the strip mall. While his friends stared at him in befuddlement, Randy booked it through the parking lot after the car.

"Wait! Wait! You have to tell me what this amazing music is."

That is what Little Randy said as he huffed and puffed his way up to the car, which had stopped because Randy chased it for so long. Little Randy was on the track team and his nickname was "White Lightning," so you know that he was super-good at running. The driver of the car was a guy in his twenties with his baseball cap turned backwards and a large tattoo of "Taz" on his exposed shoulder. He shot Randy a knowing look and said "This is rap my friend... Use it wisely". Then he ejected the cassette from the tape deck, slapped it forcefully into a case, and tossed it to Little Randy before driving away.