The Oiled Chest of the Scarlet Buccaneer

Chapter One - The Thrusting Prow of the Salty Wench

Daring the Scarlet was probably the most handsome pirate on the Seven Seas.The sea spray was washing over the decks of the Salty Wench as if a giant dog had just been given a bath and it was shaking it off. The crew worked feverishly to prevent the ship from flooding, while their bold captain Daring the Scarlet looked on from the cockpit or whatever they call that high part at the back with the steering wheel. His rugged good looks, dashing eye-patch, scarlet sash, and incredibly erotic hook-hand made for a striking figure. He had stubble on his face because pirates are too tough to bother shaving regularly and his wild blond hair was blowing in the breeze behind him.

"Arrrrrrrrrrr," he commented with contentment as the shape of Sassy Bay drew closer on the horizon.

"Indeed Cap'n," remarked his incredibly ugly first-mate Igor, "we should be in Sassy Bay by nightfall, and then the raidin' can commence."

Daring the Scarlet stroked his grizzled chin with his hook hand thoughtfully. The raid was on a bank in Sassy Bay's only town. The bank belonged to the Queen of England, and while she may be a comely lass he was not above robbing her coffers for his own personal gain. They were to spend the early evening scouting around in a manner that only pirates and cowboys do that usually involves going into taverns, breaking stuff and getting drunk, and then all walking out in a big group and robbing the bank. Daring the Scarlet hoped that there might be a bit of time to get into some horseplay with a bar wench or two. His long voyage in the Caribbean had left his loins burning with an unquenched fire and he needed a lass with a fine smithy in which to pound his sword.

"Prepare the landing boat Igor," instructed the unbelievably good-looking Daring the Scarlet as he unbuttoned his shirt and began rubbing coconut oil into his rock-like abs and pectorals.

He gave one last look at the approaching town of Sassy Bay, slicked back his single exposed eyebrow, and descended into his quarters to perfume his bottom. 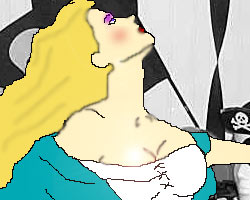 Holly McClaren wanted nothing more than to escape her domestic drudgery for a life of adventure, empowerment, and hot sex.Meanwhile, in the Leapin' Lizard tavern in the town of Sassy Bay, buxom bar maiden Holly McClaren was dreaming of a different life. She wanted to see the world and escape this sad town full of drunken sailors who always place their hands on her backside when she is serving them drinks. She had grown up in Sassy Bay, had never left the tiny island, and since she was but a young girl had worked in the Leapin' Lizard for the oppressive owner Snake O'Rapist. Nearly every night he tried to take her precious flower of love from her, but she always resisted, although how much longer she could not be sure. Over the past few weeks he had become increasingly aggressive, attempting to knock her unconscious with a frying skillet and to poison her makeup with opium so that she would be drugged and more submissive. She avoided both attempts, but tonight he seemed particularly evil and untrustworthy.

As she sauntered out into the bar area carrying a tray of ale for a table of seamen from one of the ships that brought gold to the bank she could feel his eyes burning another hole through her ass.

"We need more ale and a copper to you if you'll doss my shanty for a fortnight," leered one of the British sailors.

She didn't know what he meant by "doss my shanty" but she had a feeling that it had something to do with swallowing the sailor's man-brine. It was all an act anyway, none of the British sailors wanted to deflower her, they were widely known for their antics with fellow shipmates. She returned to the beer storage area to pour more mugs of ale and heaved a sigh of disappointment, wishing that her life could be different. Little did she know that a particularly sexy wind called Daring the Scarlet was about to blow into town and set her sails for anchor in the - Jesus I don't know where I'm going with this metaphor.