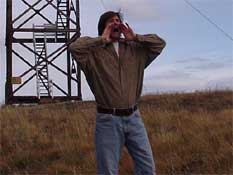 JON'S HAIR - Everyone digs Jon's puffy hairdo. It was monstrous at times, depending on the weather. It had a big ego too. It was always getting in the way and often agitating Jon, especially since it was 90 degrees most of the time we shot. On occasion it helped us out in a pinch by blocking out the background when we had to shoot close-ups in another location from where the master shot was filmed. We struck our revenge by not giving it any credit, a choice I wish I could have been able to make, as well as all involved!

WORST MOVIE - Those even tempered fellows at SA who represent all that is Unholy and Right™ in the film critique have unfairly called "FEEDERS" the worst movie ever made. Untrue! Have they seen our other pictures? Lowtax and the boys must have been lowtaxed. Let's not forget "BAD MAGIC"! Enough said.

BAD MUSIC ADVOCATES SUICIDE - Apparently the strains and screeching of our score have passed some by SA reviews unscathed as they returned to rip three more of our titles to shreds. Actually, the music isn't that bad once you've turned the volume all the way down.

FEMININE GUYS - John and Jon watched "PARIS IS BURNING" ten times to prepare for their roles in "FEEDERS." At least give them some credit. Even if you boys were half the men we are, we could still square dance you right out of the park. As far as them "opening bottles with their teeth", I can only say I saw them both try to open a can of tuna once during lunch with their teeth and I told them they should stop because once the movie gets released some astute reviewer who represents all that is Unholy and Right™ in the film critique world may pick up on it and call it to the attention of the world.

THE BEACH - Jon and Jhon are going to the beach, the Atlantic Ocean to be exact, to stare at girls in bikinis. We apologize gentlemen if we offended your feminine side; it's okay if you want to go to the beach and look at guys, just don't tell anyone. Anyway, the beach is a really cool place. You should try to get away from the therapy sessions and visit one. Of course it would mean you'd have to leave the room you're in and there would be nowhere to hang your pocket protectors, but hey, try something new. 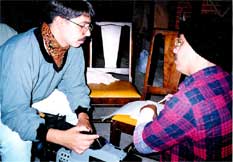 KIDDIE POOL SAUCER BURN - Well what can I say? Rich is absolutely right! What an eye! This guy knows this movie better than we do. I feel personally sorry for anyone who must have watched this film as many times as he has. We care so much it hurts!

THE ALIENS - Okay, okay, okay, so they aren't Stan Winston quality. Okay, okay, okay, so they aren't Chari Lewis finger puppet show quality, but they are charming in an inept sort of way. The one with the long head that looks like a scrotum is sadly, not with us anymore. The one featured more prominently, to no better effect, is still lurking in my basement somewhere. It has had years of abuse being "tossed and thrown" at non-actors in "FEEDERS" and has now been retired to the "Abused Puppet Hall of Fame" where it resides next to Hermie from "RUDOLPH THE RED NOSED REINDEER" (which is sort of ironic since Hermie and Jon have the same hairstyle).

BIG WASTE OF FLESH BATTLE - You can make fun of my brother Jhon, but you'd better watch it when you start hurling insults at me. For the record, John and I have only ever scrapped twice in our life, One, in the stunning battle royal you see in "FEEDERS," and once behind the scenes where he broke every single light we had! In all honestly, I think two girls would look tougher duking it out. Oh well, I don't hold the Mr. Puniverse title for nothing!

Well, that's it folks. Signing off until next time. To the folks at SA who represent all that is Unholy and Right™ in the film critique world, have your agent call ours and we'll do lunch.