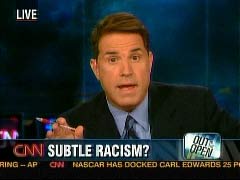 THEME TODAY: RACISM OR UNFAMILIARITY TOWARD OBAMA, THE SOUTH, EVERYWHERE?


Race: is it black and white?
Maybe not sez a new pew poll.
White north state like Obama,
Black south state do not


Is this strange world turn upside down?
Or we readin the polls all wrong?
U be the judge.
Ur emails and tweets after brk.

Dianesman says race is issue,
Cant be measure by a poll.
I cant say this guys name on the air,
But he thinks race is overblown.

What u guys think?
We wanna kno.
Text or call or email or tweet,
I just want to know that I'm not in this by myself.

A TOURIST IS SET ON FIRE, TWO MEN ACCUSED OF THE CRIME IT'S A HATE CRIME BASED ON RACE