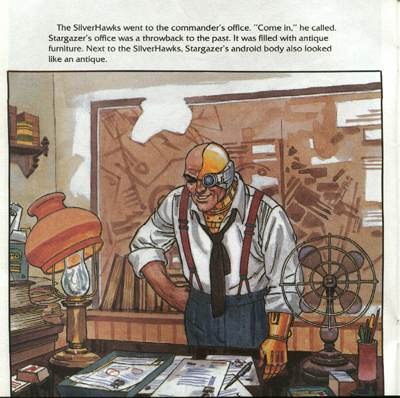 Commander Stargazer, who is an old fashioned man trapped in the body of a metallic fucking retard, calls in the Silverhawks so they can witness his horribly outdated fashion sense. Stargazer doesn't like the futuristic, highly-technical decorating style, and instead prefers the "useless" motif for his office. If you look around, you can see a map of downtown Chicago from 1948. There's a fan which doesn't seem to work, a kerosene lamp, and various other piles of crap which probably contributes to his gross incompetence when attempting to capture Monstar. This office is probably the biggest fire hazard in space. I'd imagine the whole place would burn up in flames if somebody even got a shock of static electricity from the door. Which is antique. And old. Like Stargazer. And his shitty office. 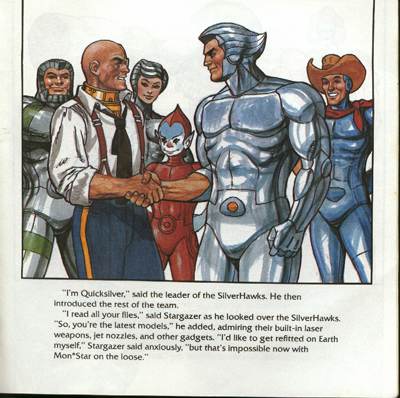 Stargazer and Quicksilver introduce, and soon they begin sizing each other up. Stargazer admires "their built-in laser weapons, jet nozzles, and other gadgets," which means he's checking out their packages. After looking at the festively adorned cowboy on the right, I can't really say that this struck me as odd.