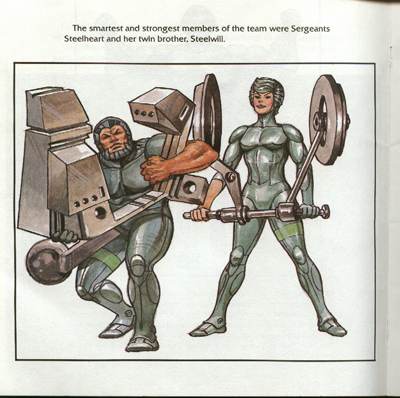 The "smartest and strongest" members of the team are Sergeants Steelheart and Steelwill, both pictured here. As you can see, they are very strong, because normal people lack the strength to pick up gigantic pieces of whatever the hell that shit is. It looks like a few pieces fell off an Intergalactic Winnebago or something, and now the twins feel a need to bench press them. I can't even begin to fathom what that crap is or why they're lifting them, but this is because I'm not smart. Steelheart and Steelwill ARE smart, which is apparently why they're molesting machinery. 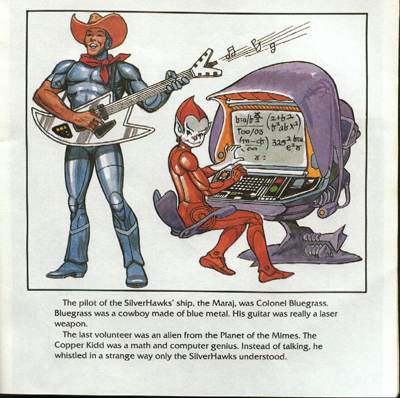 Now that Steelheart and Steelwill have been introduced, let's get to the worthless section of the team: the guys who would be traded for two minor league pitchers and a hot dog vending machine. Colonel Bluegrass, who got his name because he's a Colonel, enjoys playing bluegrass music from his futuristic guitar. I know there's a name for guitars shaped like his, but I can't think of it offhand. Oh wait, I remember. "Gay."

The last and certainly least member is the Copper Kid, a volunteer from the Planet of the Mimes. The Planet of the Mimes, which is also known as "Hell", apparently shipped off this little moron because, God knows, there's enough mimes on that planet already. The Copper Kid is a "math and computer genius," which means he can calculate to the 1,000th decimal point exactly how worthless his "math and computer genius" skills are. To top it off, all he can do is whistle. Most normal people refer to this as "catcalling", but the rest of the Silverhawk team has evolved past sexual harassment suits. If you'll look closely at the Copper Kid's computer screen, you'll note that there are some numbers and Latin symbols on it. This is because he's smart. And a computer genius. And from the Planet of the Mimes.