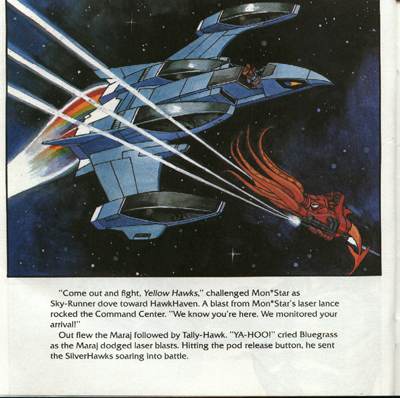 Monstar launches his attack with a little trash talking, mercilessly dubbing the Silverhawks "Yellow Hawks." See, he changed the color in their name to imply that they're yellow, which is a sign of cowardice. I bet he learned that slang in the Penal Meteor Planet. Monstar's giant flying squid shoots at the Silverhawks and misses, because in the future, lasers are incapable of ever hitting their targets unless it's something like a wire or a switch which causes a trap to fall on an enemy and temporarily detain them. I would claim that the future is a much safer and cooler place, but knowing that there are machines made from squid flying around the place, I don't think I can faithfully make that statement. 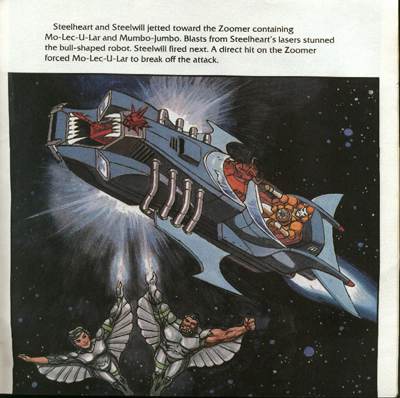 The Bopsy twins fly around and attack the space convertible housing Mumbo-Jumbo and Mo-Lec-U-Lar, who were thinking of ways to make their names even more obnoxious to write. Steelheart and Steelwill point at the spaceship, causing an intergalactic lens flare and making Mumbo-Jumbo and Molecular rethink why the hell they're flying through space with the top down. I'm not sure who's responsible for Mumbo-Jumbo piloting the car / ship, because if I'm looking for somebody to drive me around in a taxi, you can pretty much bet I'm never going to go with the guy dressed in the barnyard animal suit.