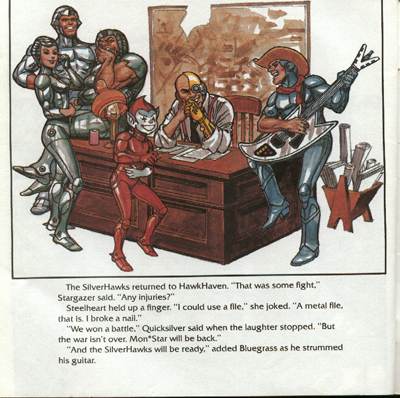 The gang heads back to HawkHaven and recounts their glorious battle against Monstar and his goon squad, which was the 482nd time they fought him that week. Steelheart demonstrates her callousness by bragging that all she needs is a metal file, as she broke a nail. Everybody laughs at this, because in the future everybody is stupid. Quicksilver tells them to shut up and stop yammering for a few seconds so he can explain that Monstar will probably come back and battle them again, and the chances are fairly high that this will happen within the next day or so. Bluegrass begins strumming his guitar and singing about lynching black people or whatever, and the party rages on to a happy ending for all... or is it? Take a closer look at that picture, will you? 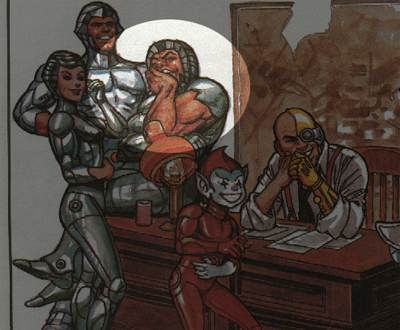 JESUS CHRIST, Steelwill's arm is TWISTED COMPLETELY AROUND! I think this is one of those "to be continued" kind of endings, because this creeped me out like you wouldn't believe. Everybody's sitting around, enjoying a good laugh and watching the space redneck play a few tunes, and Steelwill is silently suffering because either his arm has been twisted around 180 degrees, or Monstar somehow grafted a right arm onto the left side of his body, or his thumb was completely severed during combat. Maybe Buzz-Saw actually hit something with one of his 15 billion ineffective saws. Nah, that's too unbelievable, the artist was just probably drunk.