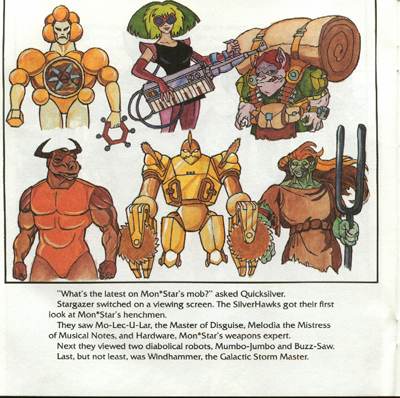 Stargazer pulls up the rapsheet detailing all of Monstar's vile cohorts. They include:

Mo-Lec-U-Lar: The only enemy whose name is even more obnoxious to write than "Mon*Star." In space, nobody can hear your non-alphabetic symbols. Mo-Lec-U-Lar's secret power is looking like a bunch of gold testicles, instantly making his enemies puke upon visual contact. He also has a futuristic tambourine which allows him to take the shape of any creature he wants, just long enough to slip up and reveal that he's actually an impostor.

Melodia the Mistress: A runaway performer from "Jem and the Holograms," Melodia attacks by playing random notes on her hi-tech digital keyboard / gun. Her hair and fashion sense help remind us why the style of the 1980's died a bloody death.

Hardware: The self-professed "weapons expert" carries around a gigantic bedroll on his back for no reason. One would think that instead of bedding, he might opt to carry around weapon parts or explosives, but all that banging on weapons nonstop obviously makes Hardware very sleepy. He's been seen taking naps in the middle of heated battles, marriages, and his own death.

Mumbo-Jumbo: "Diabolical" robot who's main talent is getting beaten up every episode. He has horns.

Buzz-Saw: Another "diabolical" robot. He gets beaten up a lot, but not nearly as much as Mumbo-Jumbo. He actually has a special power which allows him to shoot razor blades all over the place. Unfortunately, nobody ever bothered to build a targeting system into his head, and almost every single blade he shoots seems to miss the Silverhawks. As a result, there are currently 28 million estimated buzzsaws flying around the universe.

Windhammer, the Galactic Storm Master: You know, because there's a lot of cold fronts moving around the solar system and such. You definitely want the guy with the big tuning rod on your side, as he can summon a space storm in a matter of seconds. While the storms are never deadly, they do act as an excellent delay tactic, prolonging Monstar's inevitable ass-kicking by around nine seconds per episode. 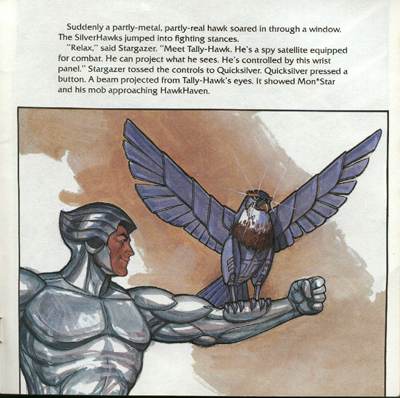 Silverhawk shows off his newest toy, a spy satellite disguised as an everyday, harmless, metal robot eagle which will easily and inconspicuously blend in with its surroundings. Tally-hawk shows some stock footage of Monstar and his goon squad being menaces, immediately causing Commander Stargazer to buy more antique coffee mugs and ashtrays to adorn his office.