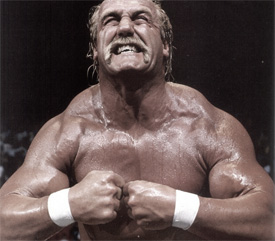 Hogan is sitting in a conference room with two WWE security guards. He dip spits into a wide mouth Code Red bottle.

Hogan: Ya'know, I've seen all different types. This is a shoot. I'm not talking baby face and heel. I'm talking about how every grappler fits into a few different types. You've got your honest guy, your crazy strong guy who is in the zone, your cock-of-the-walk sexy man, your trash-talking hillbilly, your psycho clown, your super fat guy who just sorta falls on people, racist stereotype straight out of a white power comic book, and a ghost or zombie. That one can also be a racist stereotype too.

Security Guard: Which one are you?

Macho Man and Hogan walk around an abandoned high school gym with a banner that says "POWERPLANT" hanging in tatters. There are strange squared circle symbols scrawled all over the walls.

Savage: I can taste this place. Ohhhhh yeeeeeah! The Nacho man can taste the salsa in the air. It tastes like victory.

Hogan: Ya'know this was the place where that kid got the Crippler Crossface. Waddya think it means?

Savage: Hogan, be a man. Think about this like a man. If all you've got glued into your hands are a couple of hammers, just about everything is going to start looking like a nail, even your wife and kid.

Savage: You got any idea what kind of hubris it takes to bring a life into this...meat? Ohhhhh yeeeeah, might as well put them in the Crippler right away. Get it over with.

Macho Man is back in the interrogation with the WWE security guards. He is fashioning title belts out of beer cans. He is chain smoking cigarettes. 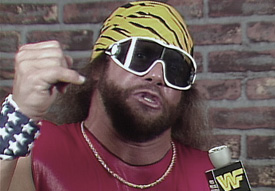 Savage: Ohhhhh yeeeeeeeah, this world is a match that nobody wins. Somebody once told me...time is a squared circle. It's Hell in the Cell and there is no ladder out. Nobody to run in and unlock the cage. We just keep on repeating the same match, using the same foreign objects, ovvvverrrr nnnnn ovvvvverrr.

Security Guard: Until we die?

Savage: *knocking over the beer can title belts one by one* Ohhhhhh nnnnnooo. When you get to the end, when Iron Mike Tenay says it's all over, the entrance music just starts playing again. Right back to the cell. There's no way to change it. Kane will always put the Undertaker into that coffin. Stone Cold will always say so.

You can always get to the bottom of the mystery by following Zack on Facebook.