Heather Clem, Hulk Hogan, Hogan's daughter in a string bikini, and Hogan's son in a house arrest bracelet are sitting at a dinner table with Macho Man. Bubba the Love Sponge is in the doorway. 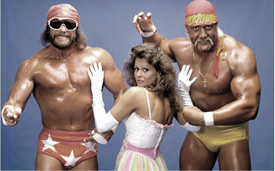 Bubba: (leaving the room) Alright, you guys do your thing. I'll be in my office if you need me.

Heather: So, um, Macho Man, do you have a family?

Heather: Oh, that's terrible! I had no idea. Hulkster doesn't tell me anything.

Savage: Probably because he tried to steal Elizabeth from me too. Pontiac Silverdome. Ask him about it sometime.

Hulk Hogan is driving the monster truck Bigfoot and Macho Man is in the passenger seat. 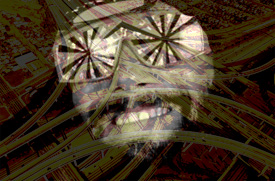 Hogan: We should check up on those kids that disappeared around Vince McMahon's limo.

Savage: This is a million dollar dream we're in, Hogan, and DiBiasi didn't put us here. It's all kayfabe we sell to convince ourselves it's a shoot. When it comes down to it, we're all just jobbers waiting for a good gimmick. And that gimmick is convincing ourselves we matter. That our lives mean something. That it's not just selling chest slaps and elbow drops and sucking down oxy.

Hogan: You got oxy?