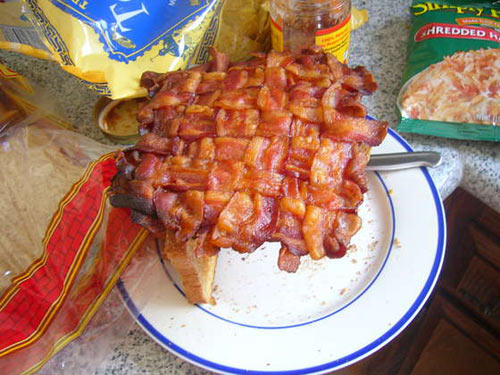 Does being around someone who doesn't drink weird you out?
- To make up for post new years guilt, a stunning conversation of "you're weird" "no you're weird", based on one's tendency towards bacon flavoured adult beveredges.

$2 a day diet?
- Bacon bacon bacon. There, see? GWS WILL do your homework for you!

Shot glasses made of ice!
- Oooo! Fill them with bacon and create an thread of hilarious proportions! I'd be a riot!

Real recipes that you will not find in cookbooks - Watermelon and Noodles
- One of the more interesting menus I've ever heard of. Somewhat lacking in bacon, though.

Look what I found outside in my front yard! - It's his dad's dragster, powered by Jesus.

Why we can't have nice things V300.1 - Apparently AI posters get their shit stolen almost constantly. If you post in AI you will own a compact Mazda or BMW 3 series and it will get a broken window when some hoodlum steals your burned CDs.

A Corvette slowly regenerates (pics) - just keep scrolling shows the fiberglass work he did on his C4 after a guard rail jumped at him.