Bizarre fake superhero toys What started out as a place to show off Oldsmobile's encounter with weird bootleg toys down Mexico way has since transformed into the just plain bizarre superhero toy thread. Speaking of transforming (oh ho what a witty segue!) check out the Punisher toy that transforms into a gun. Yes, Frank Castle turns into a gun.

Rhyno's Spoiler Station (formerly New Avengers #31) While New Avengers has come and gone Rhyno has some new news for you true believers! What is going to happen to DC during Final Crisis? Read the fucking thread to find out, jerk.

Countdown to Financial Crisis (DC's Countdown and general DCU discussion) From DC's uncertain future to its crappy present, talk about how much Countdown sucks here.

Are you sure you want a Justice League live action movie? Hey kids, its the Legion of Superheroes! An incredibly crappy TV special starring some of your favorite DC heroes like Captain Marvel, Green Lantern and ADAM WEST Batman.

Daily Funnies Appreciation and Discussion Thread - Punch and Pie A spin off of the FBoW thread in GBS. Take all your damn newspaper comic strip discussion HERE. Warning, thar be a whole lot o words in this thread.

Funny Panel of the Week.
thanks funtax 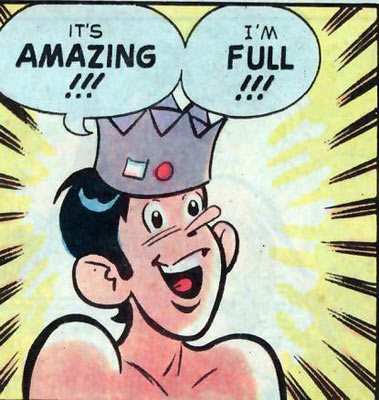 Why W&W sometimes licks my balls. Helldump sometimes has threads where someone doesn't quite understand the point of the forum or its rules so you get something like this. Inane ramblings about the Watch & Weight subforum of Ask/Tell.

Warning: Hardass Anime Con worker sighted in Ask/Tell Another wonderful Ask/Tell related thread. Better watch out, when Spuchuu is working volunteering at your local anime convention he don't take no shit from anyone. "Last year, I had to get somewhere fast. I know most of the shortcuts, so I opened a door and started climbing stairs. There's a security guy there saying "You can't go here." He was sitting in a chair and didn't bother to move to get in my way.

I stared flatly at him, showed him my badge (which had my name, photo and title) and said, "Can you read this? It means I'm more important than you. Stay out of my way." I hate being like that, but you have to be a dick to other staffers if you want something done at some of these cons." What a man!

the life and times of adtrw Another perma-banning thread. It was discovered that wildarmshero was in fact a noted fan of "lolicon" which is Japanese for CHILD PORN. "This show is crazy with the pedo overtones. CRAZY. I was rockhard for the entire 24 minutes, but for some reason I felt guilty. THIS DAMN SHOW. THIS FUCKING SHOW. Ink is like childish as hell. She acts like she's five. Or maybe four. She's also really short. God. This is like probably the most moe you can get (though watch Japan prove me wrong.) To be honest, this kind of moe doesn't appeal to me. It feels all too produced and in your face for my tastes. I prefer more honest and/or subtle moe. For example, things like Cardcaptor Sakura or Kamichu. This is just too… TOO GODDAMMIT." Hmm, yes, quite.

Crazy Zelda wedding bitch is back, with pictures Huh, this title is pretty self explanatory. Check it out, holmes.

Sayonara Zetsubou Sensei: The revenge of Shinbo - This thread is a treasure chest for homeless people.

MLS: All-Star break or GAMES IN HAND, BITCHES! And BECKHAMANIA!!!!!!!!!! - One British man. His skeleton wife. A sport nobody likes. How will it turn out?

MLB Trading Deadline Anticipation - Nobody is going to save the Yankees, but Steinbrenner sure as hell is going to empty that wallet of his. (Who am I kidding? It won't get empty)

New FIFA rankings are out. - The USA is fourteenth. Congratulations Americans, we beat out Cameroon!

Let's Make an All-Suck NFL Team! - Goons try to figure out who would be the worst players on the worst team in the NFL. The SAS consensus is out: It's the Cleveland Browns.

NCAA 08 - Matt Leinart plays as KingofTroy11 - The Games forum leaks into SAS, but poopsocking a football game is WAY MANLIER than Warcraft or some gay shit like that. Right?