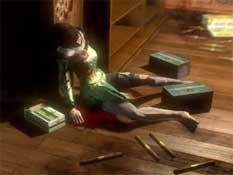 She died trying to choose the ultimate vibrator.You'll encounter many exciting people during your equally exciting journey through capitalism's sphincter, all of whom want to murder you. There are scary people who shoot you with small guns, scary people who shoot you with slightly less small guns, scary people who blow you up, and scary people who stab you. It's pretty much the cast of an average NES game, although jumping on their heads doesn't seem to produce the same fatal effect. Jim Bagleaducia claims "getting shot to death by insane bloody women with pistols" is simply a Bioshock analogy for "the stock market." If you don't get it then you're obviously too stupid to understand. It has something to do with the human condition.

The strictly linear progression from Point A to Point Unbelievable Plot Twist Central will reward you with a variety of weapons, categorized as either "plasmids" or, well, "weapons." The weapons contain your generic first-person shooter stuff like a pistol, shotgun, machinegun, rocket launcher, and all that other junk you've come to know and memorize. You may modify these weapons, as well as load them with ammunition causing things to either explode or electrify, which proves helpful in situations where you seriously need something exploded or electrified. Plasmids are Bioshock's way of rationalizing the ability to purchase magic powers from talking vending machines. The game doesn't bother explaining how eating candy bars heals gunshot wounds, but I would assume it has something to do with peak oil.

These aforementioned vending machines decorate nearly every hallway in Rapture, making me wonder exactly what Andrew Ryan had in mind when deciding to create a city selling shotgun ammunition and gene-altering syringes in public restrooms. "Oh my god, my beautiful kingdom of pure distilled capitalism, it is being ruined by people who bought the ability to spray death fire from their hands," Ryan probably shouted while hiding behind a wall of Ann Coulter books. "Perhaps I shouldn't have installed a machine selling hand grenades and vodka in the local bar." 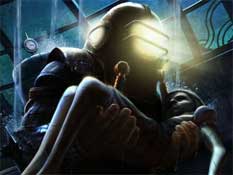 That dude's gonna score tonight.To further drill down the message that unchecked capitalism is the pits, various rooms in the game contain numerous Bibles tossed into containers marked with absurd, over-the-top stuff like "BAD!!! BIBLE BAD!!! BIBLE ILLEGAL, BURN ASAP!!!" Outlawing the Bible is pretty counterproductive; any libertarian society worth its weight in plasmids would openly encourage belief in god, as the profit margins in organized religion are absolutely amazing. I mean, there's like no overhead at all. God doesn't even have to show up during any of your organized events. It'd be like opening a movie theater and never actually showing a movie, yet people keep returning and paying every week in the hopes of possibly glimpsing Will Ferrel with an "ironic" hairdo.

The art direction in Bioshock feels fairly unique and original, perhaps due to the general lack of an "underwater alternate realities in 1960" gaming genre (unlike "World War II" and "games involving carjacking"). The art-deco style and retro atmosphere constantly reinforces the immersion through authentic sounding narration and music, although the voiceovers don't have much to say. This feedback consists primarily of audio journals where people say things along the lines of, "gosh darn capitalism, I guess it was a bad idea to sell the retirement home to a company specializing in automated head-mounted grenade launchers." Now grandma's shitting heat-seeking nuclear missiles at you. Thanks a lot, stupid free market.

Much like the original Half-Life, Bioshock manages to trap you in its universe and slowly reel you further in, avoiding a majority of the clichés and trademark issues modern first-person shooters are required to display by Federal law. Yeah there are the predictable plot twists, but I don't think anybody purchases a game or watches a movie expecting the plot to turn out exactly how it was suggested in the first scene. While the heavy-handed sledgehammer of plot points seems repetitious at times (yes, unlimited personal freedom combined with unlimited capitalism produces crummy and overtly dark results, I get it), Bioshock's patented mixture of action and strategy continually pushes you onward. Running blindly into a room populated by insane serial killers isn't always the best or optimal solution in this game, as it often offers various ways to accomplish set objectives. For example, sometimes there are air ducts you can crawl through, or exploding barrels you can blow up. Air ducts and exploding barrels in a first person shooter? Color me amazed!

I did enjoy Bioshock and fully recommend it to anybody out there tired of buying the same derivative game over and over, released by different developers on different months for different publishers. Bioshock offers an exciting, adrenaline-filled tour through what New Detroit would feel like if OCP crammed it underneath a lake. Andrew Ryan, founder of Rapture and various entertaining audio logs practically oozing aural mustache with every word, may have screwed up a few minor concepts in his utopian dream, but overall he ended up with a society more calm and rational than any Ron Paul fundraiser. I'd prefer being beaten or shot to death over that any day. And as Jim Bagleaducia reminds me, some things can be much deeper and complex than their surface element. For example, this article wasn't about me reviewing a video game. It was about me making money from advertising impressions. Thank you, viewers, for making my dream come true. I bet you didn't expect this shocking spoiler when you first began reading!