It turns out that the adventure begins well before you ride your first horse. The installation program itself is an adventure, since it comes equipped with this kickass interface, and if the window loses focus at any time the installer locks up and crashes in a very adventurous manner. During install attempt #2, as I was sitting there watching it keep track of the installation progress in tenths of a percent, about halfway through it abruptly stopped and popped up an error message that said “You have run out of space on drive C. Delete programs or remove files to free up space, and then click OK.” I skipped the ‘freeing up space’ step and simply clicked OK, at which point the installer resumed and installed the rest of the program with no problem. I could feel the adventurous blood rising within me already! 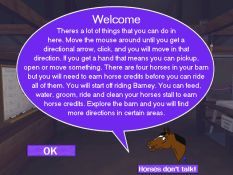 If you think that horse head looks obnoxious now, picture what it's like when it's animating, yapping at you in a twangy voice and its eyes are following the cursor around the screen.

After seeing a horribly pixellated opening movie that looked it was designed for a monitor with the same resolution as a tic-tac-toe board, I entered in my name and then got dumped into a big barn, where an annoying talking horse-head began trying to explain what I was supposed to be doing. In fact, every time I went anywhere or did anything that damn horse head kept popping up to give me a detailed explanation and brief history on whatever piece of obscure farm equipment I happened to have my mouse cursor over, until I noticed the very convenient “Horses don’t talk!” button. It doesn’t stop the messages from appearing but it at least makes the horse head shut up.

Since the game’s design doc apparently stated that making an actual game engine would be “all hard and stuff”, you navigate your way around the barn using a Myst-style interface, and you simply click on the objects you want to interact with. After I got used to the interface I figured I had mastered the game, but I was rudely awakened by the horse clipboards. See, every horse in the stable has a little clipboard next to it with information about the horse. I looked at one of the clipboards and the bottom area said “Click here to add notes.” Unfortunately for me, clicking there did not let me add notes. Instead it made the entire game freeze and my entire system ground to a halt, forcing me to reboot. Thus, my first attempt at being a world-famous horse trainer ended in tragedy. 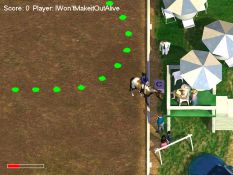 Instead of following the dots like he was supposed to, my horse decided to try and impress the judges by standing on top of the fence. I don't think anyone was impressed.

It took me some time to get over his devastating defeat, but I managed to cope with it in the time it took me to reboot and start up Championship Season again. This time I steered clear of the Evil OS-Crashing Horse Clipboards of Doom and went straight for a horse named Barney, since I hadn’t earned enough “horse credits” to ride any of the other horses. I put his halter on, and the instant I did that he did the only logical thing for a horse to do, which is to instantly disappear. A turn to the right revealed that he had not actually disappeared, but merely used his secret horse powers to teleport to the outside of the barn so we could enter into a riding event.

At last my goal of becoming a world-famous horse trainer seemed attainable! Unfortunately, to attain this goal I had to use the arrow keys to make my uncooperative horse plod through a muddy field and slowly walk over various colored dots for some unknown length of time. I’m still not sure how long it would have gone on for, because after about 30 seconds I had the horse change directions and run into the fence as fast as I could. After that I attempted to quit the event, but not surprisingly this resulted in the game crashing.

That crash was the final nail in the coffin for both this game and my aspirations of becoming a world famous cheerleader/horse-trainer. Ever since I was a child, I have dreamt of doing nothing but creating cheerleader routines and training horses, and just when it seemed that I had found a two-in-one value software package to help me accomplish my lifelong goals, they turned out to be two horrible games that crushed my ambitions into the dust. Thank you very much, Activision Value Publishing. I’m off to go cut my wrists with the jagged shards of my shattered dreams.