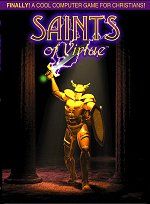 At a Glance: Recently I have noticed that I don’t have a close enough personal relationship with Jesus. The minister at my local church informed me that unless I accept Christ into my life as my personal savior I will never feel fulfilled, I will burn in Hell eternally when I die, and within a week my apartment building will fall over and melt into the ground for no apparent reason. These are all events that I would prefer to avoid if possible, so I have decided to boost my soul a little closer to heaven by dramatically increasing my daily intake of good old Vitamin J. Unfortunately I can't quite fool myself into thinking I actually have a chance of going to heaven – I kissed that goal goodbye around 4th grade when I tricked the retarded kid into eating used coffee filters until he passed out and fell down the stairs. Combine that with my habit of sexually assaulting patio furniture and I’m more or less disqualified from ever coming within miles of the big shiny golden condo complex in the sky. But after playing Saints of Virtue, I’ve decided I’m okay with that, because if this game is any indication of the kind of gaming I can expect in heaven then I think I’d prefer to spend my afterlife in hell playing an endless stream of Star Wars: Episode I games.

I’ve reviewed a truckload of games for SA, assuming it’s an extraordinarily small truck that can only hold nine or ten games, so by now I’m very familiar with the feeling of starting up a game and realizing very quickly that it is absolutely horrible and could only be enjoyed by idiots like me who deliberately seek out shitty software. But Saints of Virtue one-ups all those other bad games by being able to communicate its sheer awfulness to anyone who simply looks at the box. If the banner that says “Finally! A cool computer game for Christians!” doesn’t warn you off, the system requirements table certainly will, since this game was released in 1999 and the recommended processor requirement is a 486. Or you could just read the introduction on the back of the box, which makes it pretty clear that this is the most blatant example of a propaganda videogame since MC Kids for the NES. 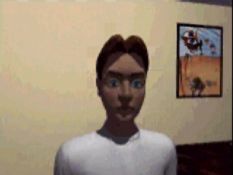 It'll take a lot more than the power of Jesus to fix this kid's problems.

WELCOME TO THE KINGDOM OF THE HUMAN HEART... A SPIRITUAL LAND DEEP WITHIN A BELIEVER’S SOUL. AS A SAINT OF VIRTUE YOU MUST PUT ON THE FULL ARMOR OF GOD AND DO BATTLE WITH THE MASKS OF HUMANITY. PRIDE, VANITY, WORLDLINESS, AND OTHER MASKS WILL FIGHT DESPERATELY TO STOP YOU FROM FINDING THE THRONE ROOM OF THE HEART AND GIVING CHRIST CONTROL OF YOUR LIFE. YOUR JOURNEY WILL BE A LONG AND DIFFICULT ONE, BUT GOD’S WORD WILL HELP YOU FIND THE WAY.

While I must admire their somewhat unique approach to word coloring, I don’t think they succeeded in their goal to make people think it would be fun to fight a bunch of floating masks who are trying to keep you from giving your life away to a guy who died two thousand years ago. But at least you’ll get to fight your way through some kickass levels, such as the Ampitheater of Apathy, the Labyrinths of Legalism, the Swamplands of Selfishness and the Airport of Amazingly Annoying Alliteration. And their website proudly declares that you will be able to collect a wide assortment of different weapons, such as the sword, the sword-launcher and the sword-blaster. No, those aren’t a sample of some of the weapons you will find, they are the only three weapons in the entire game. Not only are the different weapons as unexciting and un-different-from-each-other-in-the-slightest as they sound, but the sprites for each one look like they were made by repeatedly distorting and pasting a low-res clipart of a sword that the head of the art team found when searching for “things to stab my evil pagan neighbor who blasts White Zombie at 2 in the morning with” on Google. 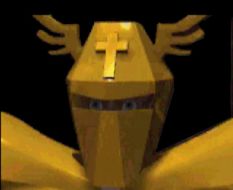 Slap a shiny golden bucket on your head and you're ready to kick some mask ass!

This is a Christian game, so instead of fighting evil imps who are bent on keeping you from saving your comrades in a moon base you’re fighting different sins (represented by giant floating masks with five frames of animation each) who are heinously trying to prevent you from swearing your life over to Jesus and immediately racing down the street to make a bunch of large tax-deductible donations to your nearest church. From the front they all look pretty much the same, but each mask has a different item jammed into the back – Vanity has a deformed boxing glove, Worldliness has a globe (Get it? Worldliness?), Self-Righteousness has a Mozart-style wig and Fear has a rusty discolored bowling ball. They dissuade you from giving your life to Christ in a very effective and persuasive way – by floating around in hallways and spitting tiny little fireballs at you. The first time one of those things hit me, I felt all my love for God drain right out of my body before being replaced with a new desire to spraypaint a chicken casserole recipe on my local church’s wall in really big pink letters. I’m not exactly sure why I felt that way or why I decided to tell you all about it, but don’t question me – I know where you live and I’ve still got some spraypaint left, fucker.