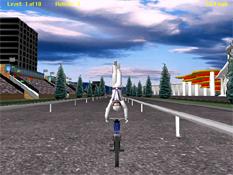 This is my favorite stunt trick, something I dub, "falling off my stupid white ass onto the ground."In addition to the aforementioned exciting gameplay modes, the game offers further entertainment value by providing highly comical graphics. Since there's really only two models in the game (Evel and his Evel-mobile), one would think that the game designers might actually put some time and effort into making them look interesting, or at least not creating something which looks inferior compared to a Lego model. Wrong again, because the two models in this game are just God-awful. Evel has approximately nine polygons to his entire body, giving his the appearance of a robot forged from Play-Dough. His motorcycle, which has absolutely no moving parts (including the wheels, which traditionally rotate on most vehicles), resembles something that would come inside a plastic bubble from those $1.00 toy machines at the more reputable grocery stores. The only good thing about the two models was watching them wreck into the other blocky objects which litter the raceway. The sheer joy and pleasure I experienced while causing Mr. Knievel to hit a rock and fly off his idiotic little toy motorcycle was simply inhuman. If it wasn't for the terrible crashing sound that emitted from my speakers every time the little bastard drove into a stationary object, I would've spent all my time running into things. Much like the rest of the game, crashing your motorcycle causes some weird defiance in the laws of known physics. Sometimes the road even travels the wrong way (the camera will change to a front view of your character, but the road will still be moving backwards - in the opposite direction - as if the camera were still behind your character). These "little touches" add an element of surrealism, an element which made me ask myself if I was really playing this game or actually having some terrible nightmare with piss-poor resolution and graphics.

So, in summary, Evel Knievel is a Great American Hero (tm) because he is able to drive his motorcycle in a straight line while avoiding rocks and roadblocks which have been thrown all over the racetrack for some unknown reason. The main skill needed in performing daredevil stunts is to correctly guess how fast you'll need to go to jump a ramp, then adding four miles per hour to that speed once you're faced with jumping a slightly longer ramp. By playing Valu-Soft's newest masterpiece Evel Knievel 3D Stunt Game, I am now aware of what it takes to be an American Hero like Evel Knievel, the man who has been in the hospital more times than the entire cast of "The Facts of Life" - PAIN. Mr. Knievel has undoubtedly suffered unbelievable amounts of pain in his career, and now you too can feel the same thing when you pick up a copy of Evel Knievel 3D Stunt Game. Have a friend ready to take you to the hospital.